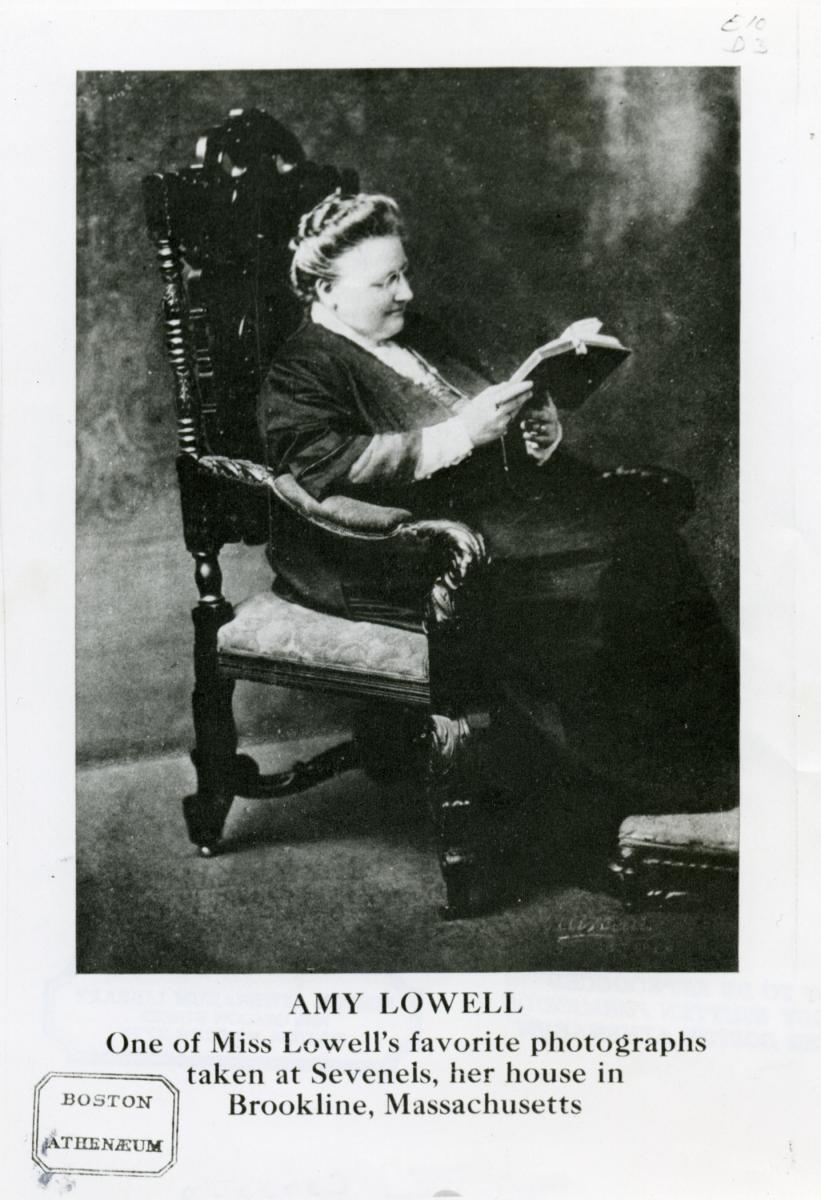 Amy Lowell was born on February 9, 1874, to a wealthy and influential family in Brookline, Massachusetts.  She was the youngest of five children born to Augustus and Katherine Lawrence Lowell—themselves products of the booming cotton industry in Massachusetts.  Lowell’s education began at the family home in Brookline, where she was taught by a governess.  Between the ages of eight and twelve, Lowell attended a number of private schools in Brookline and Boston, where she was labeled something of a class clown.  Her formal education ended at age seventeen.  While her brothers were able to avail themselves of a Harvard education, Lowell did not have that opportunity herself.  Lowell instead experienced the social scene of her class, travelling to Europe in 1896, as well as attending parties and other entertainments.  Lowell continued her education privately, as she had access to her father’s library.  Lowell also frequented the Boston Athenæum, of which her great-great grandfather was a founder.

The deaths of Katherine Lowell in 1895 and Augustus Lowell in 1900 compelled Lowell to take on the social responsibilities of her parents.  The Brookline public school system and the Women’s Municipal League are two of the many organizations that benefitted from Lowell’s efforts. In fact, the Boston Athenæum would not be in this present location were it not for Lowell’s desire to fight for just causes.  The Boston Athenæum considered a move from the Beacon Street site, an issue that Lowell vehemently opposed.  In protest, Lowell wrote a poem commemorating the Boston Athenæum; it was included in her first published collection, A Dome of Many-Coloured Glass (1912).

Lowell turned to poetry in 1902, after seeing three plays which featured the actress Eleanora Duse.  Her first book of poetry was published in 1912 and received lukewarm reviews.  Lowell continued to work despite the criticism; however, in 1913 Lowell’s poetic style was reborn after encountering a poem signed “H.D. Imagiste.”  Influenced by H.D. (Hilda Doolittle) Lowell threw herself into the imagist style, a movement founded by Ezra Pound.  She became a forceful spokeswoman for the movement, and a falling out with Ezra Pound over the direction of Imagism resulted in Lowell becoming the movement’s leader.

Beginning in the early 1920s, Lowell devoted herself to the poet Keats, publishing an extensive biography in 1925.  Lowell died of a stroke in May 1925 at the family home in Brookline.  After her death, Lowell won the Pulitzer Prize for Poetry in 1926.  The winning collection, entitled What’s o’clock, included the poem “Lilacs,” one of her best-known works.

Lowell was significant to American literary history because of the strength of her convictions and her drive to speak for that in which she believed.  She was a forceful voice for modern poetry in the early 20th century, and it is thanks to Amy Lowell that the Modernist movement developed in American literature and culture.

Boston: distinguished buildings & sites within the city and its orbit as engraved on wood
With a commentary by Walter Muir Whitehill
1975
(Requires a Special Collections Appointment)