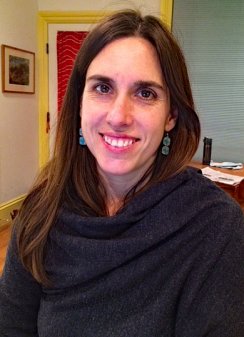 Poet Anna Ross joined me in the Deborah Hill Bornheimer Room on a blustery February afternoon to chat about poetry, motherhood, and vulnerability. Cozy in our deep red leather chairs overlooking the chill of the slate stones of the Granary Burial Ground, we discussed the importance of time, space, silence for writing, and of course, her fantastic work.

On the cusp of her second book, Ross, a Connecticut native who now lives with her family in Dorchester, had a lot to say about how the Boston Athenæum fosters writers and their creative processes. Introduced to the Athenæum by poet and friend Jill McDonough, Ross says: “As soon as we got to the quiet room on the fifth floor, I knew I had to have a membership. I run into writer friends like Jill, Daphne Kalotay, you. It feels like a writing residency. We are here to support each other and to work.” Creating community for writers is something that Ross is passionate about; she co-organizes a monthly series in Dorchester at the Home.stead Cafe called Unearthed Song & Poetry.

We discussed Ross’s writing, from revising on the subway while studying at Columbia University with Lucy Brock-Broido, to diving deeply into the extreme vulnerability of motherhood in her more recent poetry. The duality of being a mother and an artist isn’t lost on Ross, or in her poems. Ross deftly draws the irrevocable teetering dance of motherhood and artistry—which often support yet borrow time and energy from each other—with a clear eye that is not afraid to dwell in emotion.

After our conversation, I was so inspired by Ross and her poems (which have garnered a Massachusetts Cultural Council Poetry Fellowship) that I composed a portrait poem of Ross, a form Ross uses frequently in her work.

Words fly like birds of prey around the fifth floor walkup
at the top of the world, the roost of raptors, coupletted nestlings.

What is later birthed is not just one thing. Girl, fox,
smaller moons, and other invasive species:

Early motherhood is a series of disconnections
where being just one animal is impossible.

Yet what is vulnerable glides and keers under Montana, Brazil, finally
Boston skies, scavenging different words for self.

And what holds is both feather-soft and slate-carved:
Mother, hawk.