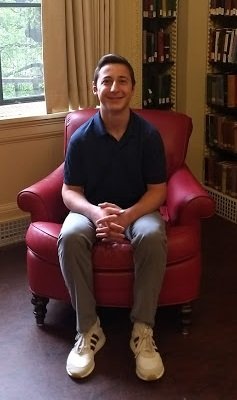 Arda Cataltepe, a rising senior at Weston High School, won first place in the 2018 Massachusetts State National History Day competition and placed as a finalist in the national competition in the individual senior website category for his project “The Room Where It Happens: The Compromise of 1790.” At the state competition, Arda was also awarded the Boston Athenæum Prize for exceptional use of primary sources. This award introduced him to the Athenæum, where he has been able to use the collections to continue his research on this topic.

Arda’s additional research has included looking at primary source materials from the Henry Knox collection: “I was able to look at a book from 1790, published by the US government, of all the Acts for two years. And I thought that was just really cool. It was easy to do and it was a great experience.” Arda also made use of secondary source materials that were difficult to find elsewhere.

Q: Can you describe your project?

ARDA CATALTEPE: The theme this year was “conflict and compromise.” I decided to talk about the Compromise of 1790, which was the dinner party between Hamilton, Jefferson, and Madison. I like US history a lot, and I was into Hamilton: The Musical and I’d read Alexander Hamilton by Ron Chernow. When I saw this year’s theme, I knew this was going to be the perfect opportunity to focus on a subject I was already interested in. I did the project as an independent study with my AP US History teacher.

Q: Have you done any projects like this in the past?

AC: In ninth grade, I had to do a National History Day (NHD) project in the individual website category as part of Honors World History. That was my introduction to NHD. The theme that year was “exploration, encounter, and exchange,” and my project focused on the negative consequences of the Congo Free State ruled by King Leopold II. I talked about how it created horrible conditions for the native population and how the Europeans’ mindset of racial superiority contributed to those atrocities.

Q: What were the struggles working on this project?

AC: One of the struggles was the word limit: 1200 words. When I did the project in ninth grade, it was more for the class, less for NHD. The teachers didn’t really give the class a word limit, so we all wrote a lot. I was in the same mindset when I approached the project this time, and after I was done typing everything up, I looked at it and it was three times the word limit. It was tough to cut it down because I had a lot to say about this topic. But I was able to do it by using more quotations from primary sources, which didn’t count toward the word count.

Another struggle was reconciling the different interpretations of this topic. One journal article that I read argued that the Compromise of 1790 didn’t actually influence the end result of the Residence Act that put the capital in DC, and the Funding Act that put into practice Hamilton’s plan for the federal government to assume state debt. That article undermined my initial argument, so I had to dig in, find a lot of sources, and see what evidence they gave. Eventually I concluded that the compromise was very influential, but that was a tricky spot when I was conducting my research.

Q: What were the highlights?

AC: One of the most significant highlights of the project was getting to interview Professor Kenneth R. Bowling of The George Washington University about the Compromise of 1790. He authored numerous sources that I used in my project and helped settle any doubts in my mind about the compromise’s importance.

Other significant highlights were putting everything together and creating the website, incorporating music from Hamilton, and looking at primary sources, especially at the Athenæum. And how much I learned about the deal and all its nuances. I really think I know a lot about this topic because of all the research I’ve done. It’s not the most well-known topic and it’s not taught in school.

Q: What draws you to the subject?

AC: I think this period of US History—post ratification of the Constitution—is compelling: the political interactions between the founders, the issues of that time, how they molded the new government. It was a critical juncture in US History. There was no precedent for anything that was happening, and I found how the founders dealt with these issues very interesting. The Compromise of 1790 is at the center of that. It resolved some of the most contentious issues at that time, and set the nation’s course from there.

Q: Is this something you’d like to pursue as a career?

AC: I could see myself majoring in US history. I have a lot of interests, so I’m not really sure in terms of a career. In college, I’ll look to take classes and see where it goes from there.

Q: Any plans for similar projects in the future?

AC: We’ll see. I don’t know what the topic is for next year, but if it’s something I can relate to this area then I might do another NHD project.