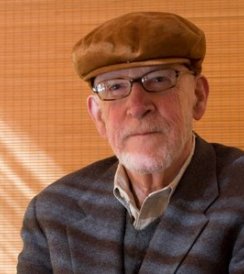 David Ferry is an American poet and translator, Sophie Chantal Hart Professor of English, Emeritus, Wellesley College and “Distinguished Visiting Scholar,” Suffolk University.  His numerous honors include the Ingram Merrill Award for Poetry and Translation (1993), the Library of Congress Rebekah Johnson Bobbitt National Prize for Poetry (2000) and the Poetry Foundation’s Ruth B. Lilly Poetry Prize for lifetime achievement (2011).  He is also a Fellow of the American Academy of Arts and Sciences.

Ferry was born in Orange, New Jersey in 1924.  He graduated from Columbia High School in Maplewood-South Orange New Jersey, and played the piano, which taught him a great deal about the metrical line in poetry.

The English Department at Amherst College, where he began undergraduate coursework in the summer of 1942, had a profound influence upon him, especially professor Reuben A. Brower (of eventual Humanities 6 fame).  Ferry was drafted into the Army Air Force in World War II early into his college career.  After returning from the war and completing his degree in 1948, he entered a doctoral program at Harvard, which eventually culminated in his book The Limits of Mortality: An Essay on Wordsworth’s Major Poems (1959). In 1952, he became a professor at Wellesley College, where he met his wife, Anne Davidson, who later went on to teach and write at Harvard University and Boston College.  Under the name Anne Ferry, she was the author of many distinguished books, among them Milton’s Epic Voice: The Narrator in Paradise Lost, The “Inward “Language, The Title to the Poem and By Design: Intention in Poetry.  They had two children, Elizabeth Ferry, now an anthropologist at Brandeis University and Stephen Ferry, a photojournalist.

Ferry began writing poetry in the 1950s. His first book of poems, On the Way to the Island, was published in 1960 by Wesleyan University Press.   Strangers: A Book of Poems (1983), Dwelling Places: Poems and Translations (1992) and Of No Country I Know: New Poems and Selected Translations (1999) were published by the University of Chicago Press.  After retiring from Wellesley in 1989, Ferry’s translation career began.  Gilgamesh: A New Rendering in English Verse, was a finalist for the Nation Book Critics Circle Award.  Since then, he has translated the Odes and the Epistles of Horace and the Eclogues and Georgics of Virgil.  He is now at work on a translation of Virgil’s Aeneid.

Two new books of poems will appear in 2012: Bewilderment: New Poems, and Translations, from the University of Chicago Press, and On This Side of the River, from the Waywiser Press (UK).

UPDATE 3/2020: Read Literary Hub’s “A Conversation with Poet David Ferry on the Occasion of His 96th Birthday”