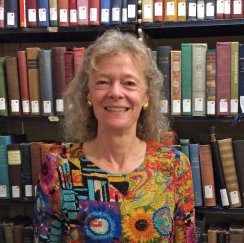 Gesa E. Kirsch is a professor in the English and Media Studies department of Bentley University, where she also co-founded the Women’s Leadership Institute (now the Gloria Cordes Larson Center for Women and Business). Her most recent publication was More Than Gold in California: The Life and Work of Dr. Mary Bennett Ritter. Kirsch edited the long out-of-print memoir of this doctor and advocate for women’s rights in the late nineteenth and early twentieth century. Ritter was one of two women attending Cooper Medical College (now Stanford Medical School) and earned her degree in 1886. She practiced in Berkeley for 20 years and became Dean of Women Students at the University of California Berkeley.

Acknowledging the thrills along with the frustrations of research, Kirsch admitted shock at what proved to be her greatest challenge in this project to share with a twenty-first century audience the story of Dr. Mary Bennett Ritter: finding a publisher willing to reprint her memoir. Kirsch offered her manuscript to University of California Berkeley, where Ritter had been a major figure.

GESA KIRSCH: You would think that the UC press would have an interest in publishing their own history.

MARY WARNEMENT: Yes, you would.

GK: They were not interested in their own history. I was very happy to find a publisher who was willing to specialize in women in the west. It was my first trade book. I usually do university presses. They turned it around fast, did nice advertising, and distributed it in museums and historical societies. Yeah, it was just stunning.

Ritter herself may not have been surprised. Kirsch’s dedication page calls out Ritter as a pioneering spirit in her thanks to Cindy Melter, great-grandniece, who is “forging a path for women software engineers in Silicon Valley” today. Kirsch had the pleasure of connecting with many who had a connection to Ritter and who see that there is still a need for advocacy for women in medicine and science today.

GK: [I spent my] last year of high school, then I went to college there, and I got my PhD at UC San Diego. I spent ten years in San Diego and now I spend my summers in Santa Barbra—I have a connection there at the university.

MW: Very nice. What brought you to Boston?

GK: A job at Bentley University but also family and friends. We actually decided to move to Boston and then look for work.

MW: You found Boston and you found Bentley. How did you discover the Athenæum?

GK: A good friend and colleague was a member and took me. She loves libraries. She took me to all the beautiful libraries of Boston. She showed me the Burns Library at Boston College and the Boston Public library, but the Athenæum was her favorite.

I love the sun and the beach so I do miss it sometimes. We have that here but the winters are too long. I was just telling a few people that this rainy spring reminded me of Northern Germany. The Athenæum has beautiful light and beautiful spaces. I use it a lot to do my creative writing and thinking.

MW: Do you have a favorite spot?

GK: You know, it varies. I’m often on the fifth floor; right now I’m trending towards the second and third.

MW: Speaking of trends, I notice a lot of your work focuses on gender studies. When did you get interested in that?

GK: Probably starting with my dissertation. I was looking at a writer’s sense of audience and there were a lot of gender issues that popped up. Not surprisingly that’s been in line with interests of mine. Certainly something I bring to my work at Bentley. In the program I team teach, I bring issues of ethics, gender, and diversity to the discussion.

MW: Team teaching. Is that something you enjoy?

GK: I enjoy it. It’s very rare. It’s an unusual gift, really, that Bentley allowed us to do that. My colleague and I continue to do that even though the program we started no longer exists. We get invited to various universities around the world and sometimes bring people to Bentley.

Kirsch celebrated the joys of research. Bentley supports travel for research, and Kirsch benefits from having relationships in the southern California area where she does some of her research. She was especially delighted by two discoveries that also revealed kindnesses.

GK: One of the joys was finding a drawing of Ritter at the Bancroft Library that was not indexed. Through the advice of the archivist—I was telling him my story and as you know, librarians are good listeners, like yourself—I was just telling him about her and her relation to Berkeley, and he knew this was the period when artists were commissioned to draw Californians. [Ritter] was a well-known Californian; that’s why in particular I was miffed when the [university] turned me down. He just went physically to the collection and searched and found it, and I have this reproduction of a charcoal drawing that I would have never found if he hadn’t been on duty that day.

MW: And you hadn’t talked about it.

GK: The other discovery was the gravesite of Ritter and her husband. I met a man on staff at Berkeley at the historical society of Berkeley. Nobody at UC Berkeley knew where they were buried—I mean, can you believe this? It’s a big system and nobody knew, so this man himself researched and found her.

GK: Which I had no contact or information at all with her and she said, “I was googling my Aunt Mary and I saw you.”

I was able to connect with her. I never met her in person, but she looked at her materials and found a book for me. The book came from her aunt so this is like three generations removed. It was just fun and also as a researcher, I wanted to do the right thing for their family. It’s their family not mine. I write about ethics a lot so this brought it home. It was wonderful to acknowledge these people in my edition.

GK: Who have gotten me excited about her work.

GK: So that was the lovely story of archival adventure.

MW: You can be thorough and scientific, but there’s nothing like serendipity.

GK: Yes, I edited a book on that topic. It’s called Beyond the Archives. You may have a copy of it, it was published in 2008 [Yes, the Athenæum does; scroll down for link]. It was a great pleasure to edit because we had all these wonderful stories like we’ve been telling here, and interdisciplinary stories from many people.

MW: Wonderful. Do you have a new project in the works?

GK: Yes, it’s coming directly out of this journal I discovered called The Woman’s Medical Journal, published starting at the turn of the last century. It was founded in 1893 and ran until 1956 as a research journal by, for, and with women physicians in mind. The research articles and treatment plans are very interesting, but all around the margins of the journal there’s announcements, news, and miscellaneous information. It really was a print-based social media platform, which is very hard to find [for that time]. Announcements of women doctors, where they got their degrees, where they were moving, where they were opening their practices. And they also warn of hostile institutions that would not let women practice, what cities and states were more progressive, where women could go and apply for fellowships, even which hospitals would support women’s internships. I’m working with two scholars out in Santa Barbara. We’re undertaking a digital humanities project, doing some mappings just to see the patterns. Now we’re in the middle of this. Finding exclusionary practices was troubling. While these women publishing in this journal were clearly aware of the exclusion and sexist practices of the medical profession, there were very few women of color included. I was just reading about the segregated medical history in this county; there’s a whole separate national medical association that was founded by and for African American physicians who published their own journal. That’s a troubling line obviously that I’m thinking about, how to write about these women who were so engaged. They mentored each other, supported each other, shared work, and yet it makes me think about my blind spots. What will someone looking at my work 20 or 50 years from now see?

Select BibliographyBeyond the Archives: Research as a Lived Process, edited by Gesa E. Kirsch and Liz Rohan (2008 )More than Gold in California: The Life and Word of Dr. Mary Bennett Ritter, edited by Gesa Kirsch (2017)