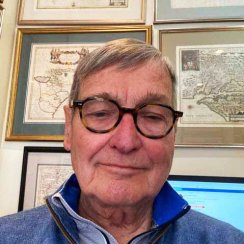 Dr. Robert T. Osteen wrote textbooks and academic articles during his career in surgical oncology. Since his retirement, he has shifted gears and published a collection of poems, Zero to Five Knots and a Book, and a history book, Festina Lente: Charting the Mediterranean 1814–1824. On an April afternoon, Dr. Osteen and I chatted on Zoom about his projects since retirement and his future research including his next book, tentatively titled Surgery Under Fire. Our conversation is edited for brevity and clarity.

Q: Can you tell us about your academic background?

DR. ROBERT T. OSTEEN: I was an undergraduate at Dartmouth where I majored in philosophy, knowing that I was going to medical school. I went to medical school at Duke where I had two years as a surgical resident. Then, I was in the Air Force for two years during the Vietnam War doing research there. After that, I went to the then Peter Bent Brigham in Boston for completion of the residency training and also to do more of the research I had been doing while I was in the Air Force. I finished the residency at the Brigham where I joined the faculty and spent the rest of my career doing surgical oncology. As part of being an academic surgeon, you write a lot of books, papers, that kind of thing. When I retired, I didn’t need to do professional writing anymore and I was free to do whatever I wanted to do.

Q: What have you written since you retired?

RTO: I collected antique maps for years. It’s too bright behind me, but I’m surrounded by antique maps. I also sail and as a sailor, I like to know where I am. It’s one of the requirements to avoid running into things. That combined with a book that came out by Dava Sobel about John Harrison’s invention of the chronometer inspired me to ask if people were interested in the invention of an accurate watch, maybe they would be interested in what you did with one once you had it. One of the first things that was done with it was to chart the Mediterranean by this naval officer,William Henry Smyth. This was something I knew virtually nothing about when I started. I had to learn all sorts of things along the way in order to write the book. It took several years to do it.

The Athenæum played a significant role. It had some books that were useful for learning one of the techniques for measuring longitude that was developed about the same time as the chronometer. The technique used the angles between the moon and a fixed star. Two separate clocks, if you will. So, the tables for how to calculate longitude from those observations were made about the same time as the chronometer. I decided I needed to learn how to do that. Since no one had done it since 1850 or so, there were no contemporary works on how to measure longitude from the angle between the moon and a fixed star. But the Athenæum had a book that had been written in 1784 about how to do it, so I spent several months in the rare book room trying to understand the peculiar printing and the fairly complicated mathematics involved in doing this. The Athenæum was very helpful with this project.

Q: And did you figure out how to do it?

RTO: I’ve learned how to do it and it’s utterly worthless, but at least I could write about it from a position of understanding how difficult it is to do.

Q: Can you talk about the book you’re working on right now?

RTO: I just finished a book about surgery in the Second World War. My father was an anesthesiologist who volunteered in November of 1942 and went overseas. While he was away he wrote about 300 letters home, which I used as a basis for exploring the surgical issues that they encountered, how they dealt with them, what was known at the time, what was not known, what was learned, and so on.

Q: Can you talk about some of the struggles and some of the joys of writing such a personal story?

RTO: Let’s start with saying that most of my life I’ve written not only nonfiction but textbooks. They are a different entity in that you are not trying to tell a story. You are describing a set of facts and you are describing it to people who are pretty familiar with what they are looking for. In writing history like this, you are trying to tell a story. The problem is making it interesting. In the case of my father’s letters, there’s medical information that’s not familiar to everyone, so not using jargon and thinking deeply about how far into the weeds I need to go is important. There is also the issue of confusing family myths with what actually has happened. I do not want to embellish things unnecessarily or relay family myths that I can’t verify. The other part of it is I had to look at some relationships, for instance, what my mother’s role in all of this was and how she viewed it. None of this was something we ever talked about, but I had to do some introspection while being careful not to over interpret things or statements that were hard or impossible to verify or that were not adequately documented as speculation.

Q: What do you hope readers will take from this book?

RTO: There’s not been a lot written for the lay public about the surgical treatments and surgical issues of the Second World War. There are some that are well known, for instance, the problems with procuring blood. There was a Blue Ribbon Commission before the war started to decide how to treat patients who have a significant amount of blood loss. They concluded that plasma, that is blood free of red blood cells, is just as good as whole blood. That is absolutely wrong.

This was also when they first started to question whether white soldiers could accept blood from Black donors. The Red Cross actually hemmed and hawed about whether they would even use Black donors at all. The first policy was to mark the units to indicate whether they had come from a white or Black donor. This was despite the fact that all of science said it did not matter. The only thing that matters is blood type. Skin color doesn’t make a bit of difference. As far as I can read from my father’s letters, it didn’t make any difference to him. Somebody who was bleeding to death needed blood from whatever sort of donor there was. I remember him talking about it and saying that this was utter foolishness, but it was prevalent at the time. I do believe that it was a debate that went on and on and actually hindered the war effort.

Q: How has the pandemic affected your writing process or your research process? Has it helped or hindered it in any way?

RTO: My opportunities for leaving the house were limited, so I put together a book of poetry. I’d written poems over several decades, and I had them on the computer. I put them together and published them in lieu of getting out and doing any of the footwork that I needed to do for the next project I’m working on. It was a wonderful opportunity to edit and reread a bunch of stuff written over the years. That was great fun.

Then, I started a new project which is to look at King Philip’s War in Southeastern Massachusetts. We have a summer house down in South Dartmouth, and there are loads of King Philip’s War sites around there. I’m trying to put together a collage of snapshots that would allow people to come up with a picture of what life was like and what the country looked like at the time. I need to be out and able to travel around and talk to people to do that, so I spent the pandemic just reading books and taking notes. I have a stack of index cards over there, which is the start, at least. Getting the data together for this project probably takes a couple of years.

Q: You write textbooks, poems, and history. How does your writing process differ for each one?

RTO: The textbooks are a little easier for me because I’ve done more of that. It’s just a matter of knowing everything there is to know about the subject. It usually amounts to several hundred references. Once you have got it in order as to what you want to say, which is very straightforward, there’s a formula that essentially every textbook uses and you just plug it in.

For the two histories that I’ve finished, I’ve done a similar sort of thing and I just take notes. I read, I try to learn as much as I can about it, and I take notes on index cards in the oldest fashion way you can possibly do it because I couldn’t figure out a way to do it on the computer that was either time saving or useful. I just end up with a stack of several hundred index cards that I then put in order according to roughly where I think chapters are going to be, take each one of those and sort them out by paragraph, and then try to get something on paper.

Regardless of what I’m doing, whether it’s poetry, a textbook, or history, just getting something on paper is the first maneuver, without worrying about sentence structure or much of anything else. Then, I rearrange it in the order that I wanted and, as I said, textbooks tend to be pretty formal, whereas the order of how you do history is much more important and also not as prescribed. Chronologically turns out to be the easiest way to do it. I’ve fought that at times, but usually given up and just ended up with chronological order. Once it’s on paper, you start reorganizing things and then there are multiple efforts at editing.

One of the things I learned early on about textbooks is that it’s really hard to write a sentence that means exactly what you want it to mean. Writing something really clearly and easy to understand is hard, and so I would write something I thought was pretty close to finished, put it away for a week, come back and read it again, and think ‘God, that’s not what I meant. It could mean several things. That’s not how I want it.’ With non-fiction, textbook kind of writing, it’s really key to get the sentence to mean exactly what you want. The additional problem is to make clear when you’re filling in something that you can’t document, or when you are making an assumption, because you don’t have a letter or a fact somewhere that you can use to document it.

Q: What are you reading right now?

RTO: I’m reading almost exclusively stuff on King Philip’s War. One of the last lighter books I read was Dirt: Adventures in Lyon as a Chef in Training, which is this story written by Bill Buford, editor at the New Yorker, who decided he wanted to learn how to be a French chef. He got a part time internship at a restaurant in Washington, D.C. where this innovative chef has a salad he made to look like a flower pot. Apparently the hardest thing about the salad was the creation of the dirt. That was the source of the name, and then he goes off to Lyon to learn the origins of French cooking. It’s a wonderful story and very well written.