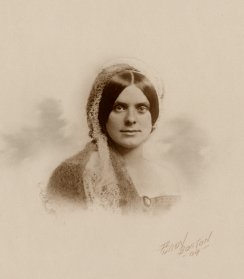 The snow and the silence came down together,
Through the night so white and so still;
And young folks, housed from the bitter weather,—
Housed from the storm and the chill,—

Heard in their dreams the sleigh-bells jingle,
Coasted the hill-sides under the moon,
Felt their cheeks with the keen air tingle,
Skimmed the ice with their steel-clad shoon.

This month’s author is today best known for her myriad friendships with the lettered men and women of her time but was in fact an accomplished poet and writer herself. Louise Chandler Moulton, christened Ellen in 1835, was born in Pomfret, Connecticut, the only child of Lucius Lemel and Rebecca Clarke Chandler. At Christ Church Hall School in Pomfret her classmates included the artist James McNeill Whistler and Edmund Clarence Stedman, one of the first seven men chosen for membership in the American Academy of Arts and Letters. Both Whistler and Stedman remained Moulton’s lifelong friends, and she always kept Whistler’s childhood gift of an “exquisite little painting,” lending it to be part of a Boston exhibition sponsored by the Copley Society after the artist’s death.

In her youth Moulton was a diligent student, as was expected from her stern Calvinist parents but also, it seems, because she enjoyed learning. Her free time was given over to versifying and creating stories of young women with lives more dramatic than her own. She wrote of the heroine of one of her tales that “ideality was the predominant characteristic of her mind.” This could well be said of Moulton herself, who was first published at the age of 14, when one of her poems appeared in a newspaper of Norwich, Connecticut. Encouragement from friends and other authors who had seen her work followed and she went on to contribute poems to gift books. At the age of 17, she edited a gift book of her own verses and short stories along with contributions from other authors, called The Book of the Boudoir. With this publication she came “fully and formally into full-fledged authorship,” according to her friend and biographer Lilian Whiting, and a wider audience saw that “she was deeply tinged with the sentimental fashions which reigned universally in America in the middle of the nineteenth century.”

The melancholy and sensitivity of Moulton’s poems have been attributed to her strict Protestant upbringing, even by herself. The doctrine of election, in which the identity of those who will be saved and admitted to heaven has been preordained by God, haunted Moulton as a child. Despite the fact that her parents were not fanatical, their faith instilled in their child a foreboding of doom and despair and she “imaginatively suffered intensely.” As an adult, Moulton once told a London interviewer, “I can recall waking in the depth of night, cold with horror, and saying to myself, ‘Why, if I’m not one of the elect, I can’t be saved, no matter how hard I try.’” Indeed, if much of Moulton’s poetry seems to have an underlying obsession with death and the departure of loved ones, this might be the answer to the origin of her pathos.

At the age of 18 Moulton published another book, which reportedly sold 20,000 copies: This, That, and the Other, a collection of all her previous submissions to newspapers and magazines. At over 400 pages long, it received glowing criticism; Stedman even compared Moulton to Harriet Beecher Stowe. In hindsight, Whiting considered this review “a matter of private judgment … for although the stories of Ellen Louise were singularly sweet and winsome in their tone, with an unusual grasp of sentiment and glow of fancy for so youthful and inexperienced a writer, they could hardly yet claim to rank with the work of Mrs. Stowe.” Regardless, this publication contributed to the high regard in which Moulton’s peers held her when she joined Mrs. Willard’s Seminary in Troy, New York, when she was 19 years old. At the end of the one-year education she was chosen as the class poet and was asked to write and deliver a fairly standard verse for the commencement ceremony.

During her time at the women’s school, Moulton contributed regularly to literary magazines such as Godey’s Lady’s Book and Peterson’s Magazine, and six weeks after her graduation, on August 27, 1855, she married William Upham Moulton, the publisher of The True Flag, one of the many magazines that had published her poems. The couple moved to Boston, where Moulton settled in as part of a vibrant literary community. The two were members of the Boston Athenæum, and the last time she saw her friend Ralph Waldo Emerson before his death was in fact within those walls; he had just returned from a trip to California and asked if she had ever ventured there to see the big trees. Along with enjoying the historic environs the city had to offer, the new Mrs. Moulton hosted a Friday salon in her home, which was frequented by artists, musicians, and writers, including John Greenleaf Whittier, the poet and abolitionist, poet Henry Wadsworth Longfellow, and poet, physician, and professor Oliver Wendell Holmes, Sr.

Interestingly, Holmes was the inventor of the American stereoscope, consisting of two prismatic lenses and a wooden stand to hold a stereo card, which displayed two copies of the same photograph side by side. Looking through the two lenses rendered the image three-dimensional, and was an enjoyable recreation for those who wanted to view (rather than read about) monuments, nature, and celebrities far before the age of the television, internet, or even radio. One must wonder whether it was Holmes’s influence or her husband’s know-how as a publisher and promoter that prompted the creation of a stereo card featuring Moulton posing in the fashion of the day. Either way, public interest in her works and her person were clearly very high. Indeed, when in 1855 she published the novel Juno Clifford anonymously, it received high praise even without her name attached to it; surely her earnestness of spirit shone through in all her works, whether attributed or not. And it was a spirit fitting with the times, for as Whiting noted, “the fiction of the day was . . . largely occupied with a certain didactic embodiment of ideas of conduct,” and Moulton’s heroines always acted as a good woman should.

Moulton’s third book, another collection of her stories and poems previously published in magazines, aptly titled My Third Book, appeared under her name in 1859. From this point and for the following 10 years Moulton’s extensive notes on her reading are extant, a practice she had picked up in school along with a taste that was “catholic” and an “attitude toward literature … of genuine seriousness.” She found The Scarlet Letter profoundly impressive, for example, but thought Sense & Sensibility “interesting but deficient in earnestness.” There are also notes for many projected but unwritten stories, though in 1873 she published Bedtime Stories, dedicated to her young daughter Florence. Florence became an only child as Ellen Louise had been, for a son born not long after died within a few days. Meanwhile, Moulton contributed to newly-launched magazines, including such titles as Atlantic Monthly, Harper’s and Scribner’s, and also some children’s publications. She also served as the Boston literary correspondent for the New York Tribune from 1870 to 1876, and contributed a weekly letter on books for the Boston Sunday Herald from 1886 to 1892.

In this mature stage of her life Moulton’s salons were frequented by the Sargents, the Howes, and the Higginsons, and she began to travel abroad to London and Paris. Eventually, she spent six months of the year in London and presided over a salon there, where she knew Browning, Eliot, and Hardy. She also met Swinburne, through whom she came to know the Pre-Raphaelites, including its leaders, the Rossettis, and important followers like William Morris, William Holman Hunt and Edmund Burne-Jones. Her successful effort to win recognition in America for these artists and writers, considered “late Romantics,” was one of her major achievements. Yet three more of her own books were still to come, all of them travel sketches and cultural “appreciations”: 1881’s Random Rambles; 1887’s Ourselves and Our Neighbors; and 1896’s Lazy Tours in Spain and Elsewhere. In 1888 her husband William passed away, and though “no faith or philosophy could ease her fear of death,” Moulton reportedly found some solace in Christian Science in her own last months. She died of Bright’s disease in her Boston home in 1908, and is buried beside her husband in Mount Auburn Cemetery, Cambridge. 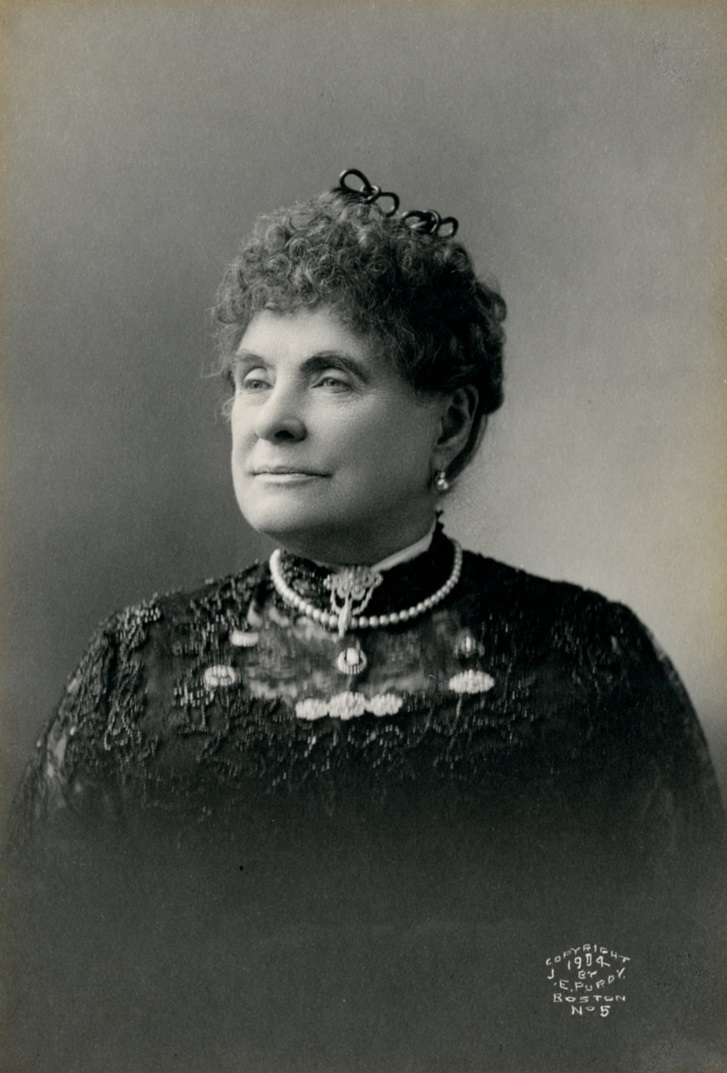 Ellen Louise Chandler Moulton was never domestic in her tastes, nor involved in the social questions of her day. She corresponded with a Mrs. Eliot who along with her husband was a constant supporter of the Booker T. Washington School in Tuskegee, but there is no evidence that Moulton ever supported those less fortunate. Instead, she gave to the world a number of stories, some pleasant, some heart-rending. Aside from her fostering of others’ talents and the introduction of Pre-Raphaelite and French symbolist poetry to an American readership, Moulton’s most enduring legacy is her poetry, in which “she recorded her deepest convictions and her most intimate perceptions of the facts of life.” Moulton herself once called her work “the rhymes into which, from the first, I put more of myself than any other form of expression.” Unfortunately, like many women, she is today remembered for the men she knew and cultivated rather than in her own right. Yet the evidence of many professional portraits taken over the course of her lifetime and the fact that many photographs from her youth were reissued the year after her death suggests that her contributions to Boston literary life were appreciated by her contemporaries.