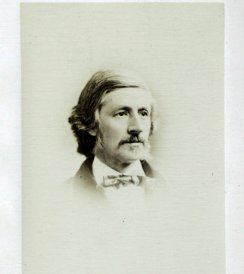 This month, we feature an Athenæum Author often at the fringes of many other famous lives and stories, from the Transcendentalists of Concord to the wildest abolitionists of the Civil War. He led a life of literature, tragedy, controversy, and passion, this “dark celebrity” of Boston: Mr. Franklin Benjamin Sanborn.

Sanborn was born on December 15th, 1831 in Hampton Falls, New Hampshire, the fourth of what would later become six children. Later known for as an avid abolitionist, Sanborn reflected that even as a child he thought himself “already capable of making some stir in the world.” In his young life, Sanborn was close with his brother Charles, ten years his senior, with whom he did much reading and studying of various languages including Latin and French.

Both brothers had a passion for politics and after the 1840 election, older brother, Charles became more heavily involved in local journalism and social policy; younger brother Franklin “sympathized entirely with him and his views.” Both were young to be so swept up in the issues of the age: Charles in his early twenties and Franklin in his teens.

Sanborn lost some direction during his later teenage years: “I had formed no scheme of my life,” beyond declining the suggestion that he should become a cadet in West Point. Around 1850 he says he “drifted along” visiting friends and even “joining a cooking club.” He had also joined a local literary society for reading and writing several years before and kept up his presence in the club.  His writings from one of these meetings were passed along by mutual friends to his future wife Ariana Smith Walker. After this initial spark, they were close companions, writing many letters and poems and exchanging ideas on literature and life.

After much encouragement from Miss Walker, Sanborn eventually enrolled in Phillips Exeter academy in New Hampshire to continue his education. During his studies at Phillips Exeter and later at Harvard, Sanborn was inspired by (and befriended some) of the great writers and thinkers of the age and area. His time at Harvard associated him with the likes of Henry David Thoreau, Walt Whitman, Bret Harte, and Henry James, all “still unrisen stars in our firmament.” Others he sought out in Concord also included Ralph Waldo Emerson, Nathaniel Hawthorne, and Louisa May Alcott.

In 1853 while Sanborn studied at Exeter, he confessed his love to Miss Walker and they were engaged to be married as soon as he finished his term. However, their engagement rushed to marriage at the return of a recurring “mysterious illness” which had bothered Miss Walker for many years. They had been married only eight days before the illness took her life and she passed away August 31, 1854. Sanborn, deeply affected by the loss, was often seen in the cemetery, “the epitome of romantic Victorian mourning.” Despite a failed proposal to Emerson’s daughter and Sanborn’s marriage to his cousin, Louisa Augusta Leavitt in 1862, he wrote decades later that “Never in a long life—now half a century since her death—have I found another so truly a woman” as Ariana Walker.

However, he also acknowledged that the sad passing of Miss Walker helped propel him into the next phase of his life. Indeed, his then brother-in-law, George Walker, forged a connection between Sanborn and the civil war revolutionary John Brown. Mr. Walker wrote a letter of recommendation on behalf of Brown who had come to New England seeking funds for his cause. Brown was a fiery addition to Sanborn’s life and the author took a leading role in raising financial support for Brown, bringing in over $17,000 in 1855. That summer, as secretary of the Massachusetts Kansas Committee (which worked to make Kansas an independent, slave-free state), Sanborn traveled through the prairie states and territories on a tumultuous tour of “inspection and consultation.” For the New England scholar, the high tempers of citizens and the ever-present border skirmishes were outside of his usual activities. He carried a revolver for the trip, though was loathe to use it, and he returned to Massachusetts “without further adventure.”

During this escalation of national tension, Sanborn was a critical member of the Secret Six, an organization of six men who financially supported John Brown in his abolitionist campaign and in the greater cause of a free state of Kansas. In addition to Sanborn, its members included: Thomas Wentworth Higginson, Samuel Gridley Howe, Theodore Parker, Gerrit Smith, and George Luther Stearns. Without open acknowledgment, their funds also supported Brown’s iconic raid on Harper’s Ferry. The six did not know the full details of Brown’s plan, though Sanborn knew the most, serving frequently as Brown’s contact for the rest of the group.  He says “although Brown had casually asked me…what I should think of an attack on the arsenal at Harper’s Ferry, it did not give me the impression that he meant to begin there.” Though the Secret Six sought to fund and support the freedom of Kansas, they purposely kept themselves unaware of Brown’s full intentions. This would prove a helpful strategy in the controversy that followed.

A nation-wide fervor exploded after the infamous conflict at Harper’s Ferry arsenal on October 16th, 1859. After the raid, southern officials seized an “indefinite number” of Sanborn’s letters to Brown and others at Brown’s headquarters at Kennedy Farm in Maryland. As soon as the news of the lost letters reached Sanborn in Massachusetts, he searched through his own papers, destroying any that might compromise others involved. He met with other members of the secret society who feared they “might be suddenly and secretly arrested and hurried out of the protection of Massachusetts law.” Sanborn quickly left the area and settled briefly in Quebec.  Along the way he “did not testify anywhere, silence being the best protection my implicated friends could have.”

However, after a week away, letters from his sister and from friend Ralph Waldo Emerson urged him to travel back to Concord. Upon his return Sanborn conducted his life in Massachusetts as usual, continuing his support for Brown’s cause and family. He learned of the ongoing fates of his co-conspirators: one of the Secret six fled to England, and another to upstate New York. Others in the area outside of the Secret Six were arrested for their connections to Brown. Sanborn’s anxiety increased.

Sanborn proposed to Virginia senator James Mason that he testify regarding the case in Massachusetts, rather than the south, but the request was promptly denied. Fearing his safety, Sanborn again retreated to Canada in January of 1860. He waited several weeks without remarkable news and returned to Concord, thinking officials had given up their chase of him.  But on April 3, 1860, he was put under arrest, handcuffed in his home. Sanborn reflects that he was “young and strong and resented this indignity,” fighting his captors all the way to the carriage. He “braced [his] feet against the posts” of every door and fence to slow their progress.  Meanwhile, his sister raised the alarm in the neighborhood, sending church bells ringing and dozens of Concord’s occupant’s rushing to his aid. Sanborn was held in confinement overnight, but his arrest was deemed illegal by a local judge and he was released.

Enough evidence could not be pieced together from the letters that had been seized at Brown’s headquarters in Maryland and the mob that came to Sanborn’s rescue in Concord showed it would be a difficult task to lay a charge to Sanborn’s involvement. Eventually the legal focus faded and Sanborn lived freely.  In the aftermath of Harper’s Ferry he wrote many letters to newspapers speaking on behalf of the other Secret Six members and later for John Brown himself. Sanborn had only admiration and praise for Brown: “From the first I honored him and the more I learned of his life the more I honored him…John Brown and Abraham Lincoln were the two most illustrious martyr-heroes of their time.”

Sanborn quickly published a glowing biography of his revolutionary friend. Sanborn spent the intervening years continuing to teach young scholars in Concord, as well as editing and working with publications such as Boston Commonwealth and The Springfield Republican. He wrote many additional biographies of his lively and famous friends including Emerson, Thoreau, and Hawthorne.

Though Sanborn “never the least regretted my small share in Brown’s enterprise” he did feel responsible for his execution and the strain that placed on his remaining family. Throughout his elder years, Sanborn made numerous efforts to raise funds for the Brown family. Many years later, in 1910, he was appalled when another biography on Brown was published by Osward Garrison Villard. This version was more critical of controversial acts throughout Brown’s life, expanding on topics that Sanborn’s hero-admiration of this “icon of liberty” did not touch.

In 1917, when traveling to visit his son in New Jersey, Sanborn sustained a broken leg when he collided with a railroad baggage car. The wound did not heal well, and he contracted a fever, subsequently passing away at the age of 86. To honor him, Massachusetts’ House of Representatives adopted a bill celebrating the social work he had accomplished, giving particular mention to his role as “confidential adviser to John Brown of Harper’s Ferry, for whose sake he was ostracized, maltreated and subjected to the indignity of false arrest, having been saved from deportation from Massachusetts by only mob violence.”

Sanborn lived a long and inspired life, always seeking to help a worthy cause. He maintained deep and unwavering friendships with a ranging cast of characters and only had proud and glorious words with which to describe them.

Emerson and His Friends in Concord
Cutter Classification: 964C7 +S

The Life and Letters of John Brown, Liberator of Kansas, and Martyr of Virginia
Cutter Classification: 65 .B814 .sa