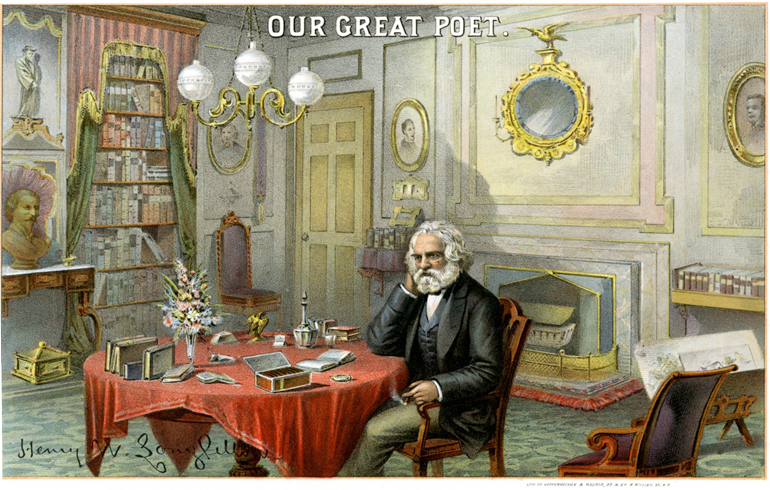 Though he is most strongly associated with Massachusetts, Henry Wadsworth Longfellow was actually born in Portland, Maine in 1807. The second oldest of eight children, he was known as a bright child and an avid learner. From early on, he dreamed of becoming a professional writer and created various writing projects with a childhood friend. He semi-anonymously published his first poem in the Portland Gazette at the age of 13 and was heartbroken when he overheard his father ridicule it in conversation with another man. But that didn’t prevent him from continuing to strive to be a poet.

As a teenager, Longfellow attended Bowdoin College alongside his older brother Samuel and fellow future-Athenæum member Nathaniel Hawthorne. The three graduated in 1825 and in 1826 Longfellow began a three year trip through Europe in order to acquaint himself with its literary masters and cultures. His time there allowed him to become fluent in seven different languages and absorb the influences of a wide range of European literature, from the classics to the modern. Though his passion remained literary, his mastery of foreign languages prepared him for what would be his first career: professor of foreign languages first at his alma mater, Bowdoin College, and later at Harvard University. Though he loathed his situation at Harvard, he remained at the position for 15 years as his literary career took off.

About a year after starting at Harvard, Longfellow, his wife Mary, and some friends traveled to Europe. The trip turned tragic when Mary suffered a miscarriage and died while overseas. Longfellow had her body sent home for burial and remained in Europe, hoping to find some solace. He seemed to find it in the company of the Appleton family, Boston Brahmins whose daughter Fanny would become his second wife years later.

Fanny’s initial rejection of Longfellow’s love is seen as a potential catalyst for the bulk of his most productive period. He’s known for both his poetry and prose, with his most famous works including the autobiographical novel Hyperion and poems including “Evangeline: A Tale of Acadie” and those collected in Tales of a Wayside Inn. He took inspiration from sources ranging from cosmopolitan Europe to the most rural and unknown parts of America. His poetry was beloved internationally and Longfellow became a celebrity while still working full time at Harvard.

Hyperion is among Longfellow’s earliest works and is based on his experiences in Europe. It tells the story of a young man traveling through Germany after the death of a dear friend. The main character, Paul Fleming, is a thinly veiled Longfellow and the object of his unrequited love is a clear stand-in for Fanny Appleton. Fanny herself noticed this and was unimpressed. Many reviewers were equally unimpressed with the book for various reasons, but it remains an essential part of Longfellow’s canon.

After seven years of persistent wooing, Fanny finally relented and married Longfellow. They had six children together, five of whom survived into adulthood. The family lived in the now-iconic Craigie house in Cambridge and by all accounts were very happy, with Longfellow’s group of intellectual friends and confidants gathering there and Longfellow becoming more and more celebrated in both literary and mainstream circles.

Tragedy struck in 1861, however, when Fanny was killed in an accident at home. While sealing envelopes with hot wax, she set fire to her dress and was severely burned. Longfellow tried to use his own body to put out the flames without success. Fanny died the next day and Longfellow had permanent scarring on his face, which he later kept covered with his famous beard.

Longfellow was never quite the same after Fanny’s death. His creative output slowed significantly and he began focusing his energy more on translations than original works. He primarily worked on translating Dante’s The Divine Comedy and published his version in 1867. However, some of his most famous poems come from this era of his life. Among these are the poems in the collection Tales of a Wayside Inn.

Tales of a Wayside Inn is strongly reminiscent of Chaucer’s The Canterbury Tales. A group gathers at an inn in Sudbury, Massachusetts on a crisp autumn night. There, they trade stories in the form of poems. Like he did with Hyperion 20 years earlier, Longfellow based the characters on existing people, including the American poet Thomas William Parsons and famed Norwegian violinist Ole Bull. The inn is also a real place, situated about 20 miles from Longfellow’s home in Cambridge. The characters tell their stories by firelight, with occasional interludes. As with Longfellow’s previous works, the topics of the poems are drawn from a variety of historical sources. By far the most famous of the collection is “The Landlord’s Tale,” also known as “Paul Revere’s Ride,” a romanticized depiction of a then little-known Revolutionary War figure.

Despite his partial retreat from public life, Longfellow remained beloved by the people of Cambridge and beyond. It was during this time that he was an active member of the Boston Athenæum. His home became a tourist destination and he often greeted visitors personally. For his seventy-second birthday in 1879, the children of Cambridge presented him with a chair carved from the tree depicted in his poem “The Village Blacksmith.” The tree had been cut down and rather than let the wood go to waste, it was used to honor the poet.

Longfellow died about three years later after a brief illness. The nation went into mourning, with bells chiming in Cambridge and tributes coming from esteemed members of the literary world. However, after his death, his reputation took a hit with critics coming forth to condemn his works and style. Despite these attacks, he remained an integral part of popular culture and his influence has continued to be felt over the years. In 1892, the owners of the How Inn in Sudbury, the basis for Tales of a Wayside Inn, renamed their inn Longfellow’s Wayside Inn, which remains its name to this day. Longfellow also has a bust in Poet’s Corner of Westminster Abbey, the only non-British figure to be honored in this way. And in more recent times, he has been the subject of postage stamps, songs, and novels. It seems that, despite whatever changes have and will come to American literature, Longfellow will always remain an essential figure.