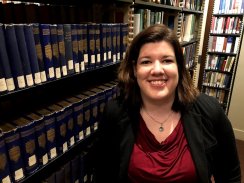 Are you looking for everything there is to know about the literary community in Boston? Then the Boston Book Book blog is the site for you. Jessica Kent started the Boston Book Blog in 2012 and has been managing the site ever since. In addition, Kent works as a scribe at Harvard Business School, enjoys creative writing, and runs her own book club. Kent’s work as a writer, website manager, and literary enthusiast is a reflection of what she loves: writing, history, and Boston.

Kent was born in Albany, New York, and her love for reading and fascination with all things Boston and history started young. “When you’re in Albany,” Jessica says, “you’re either the New York City people or the Boston people. We were always the Boston [and] Cape Cod people.” She continues, “I grew up as a reader, but didn’t really notice I was a reader. I grew up watching my dad sit in his lounge chair every evening after dinner and read.” Kent dabbled in fiction and knew in high school she wanted to be a writer. After graduating high school, she moved to Boston for the first time when she started college. She graduated from Emerson College with a Bachelor of Fine Arts in Writing, Literature, and Publishing with a concentration in Creative Writing and worked as a bookseller for about ten years. However, her desire to be a writer always remained. Not fully satisfied with the literary community in Albany, she moved back to Boston in 2012.

That same year, she started the Boston Book Blog. “When I got out here I had an apartment in Somerville. My window overlooked the city in the distance. I remember sitting down and saying, ‘Okay, I’m going to find out everything that is going on in the local literary community.’” After searching the internet she came up empty. Kent was shocked to find that a city like Boston with a blossoming literary community did not have a single place to go to become immersed in all things literary. There were bits and pieces of information about local events, but no single place someone could go to view everything. So, she started it—the Boston Book Blog was born. “I collect all the local literary events into one master calendar. I have over 100 websites that I check.” In the early days the blog ebbed and flowed, but continuous support from the community encouraged her to keep at it. She’s focused on making connections and building rapport. The pandemic caused Kent to shift the focus of the website to conducting more author interviews, promoting local authors, and just trying to get the word out. During the COVID-19 shutdown in Boston, “it was depressing that first month, because there was nothing to post.” After a while, “it was really cool to see the local community starting to figure out virtual events.” For Kent, “it’s neat to see so many more people being able to log into virtual events than could fit into a bookstore.” The Boston Book Blog “is still a one woman operation, though I’ve fooled many people. It’s cool because I know a lot of people and a lot of people know me, but it’s tough because if I don’t do it then it doesn’t get done.” If you’re interested in keeping in touch with the Boston Book Blog, you can sign up for their newsletter here.

Along with the blog, Kent runs a book club affectionately called the Brew Pub Book Club. “It actually started as a Moby Dick book club when I was doing my Master’s, and I said to all my friends, ‘Guys, I gotta go through this for the next year, if you wanna read it, now is the time to do it.’” The initial thought was to read Moby Dick over the course of a summer, while Kent was working on her ALM in English from Harvard University, but that plan fell through rather quickly. At their first meeting, nobody read the assigned pages. “We ended up taking nine months to go through it,” Kent says. “We met every two or three weeks at a bar in Harvard Square. There were three others and I bought them little gifts at the end.” After finishing Moby Dick, the group continued to meet and decided it should be a “real” book club that read more than just Moby Dick. The club mostly reads fiction, although they don’t shy from non-fiction. Kent is serious about reading and makes sure the participants are, too.  “A lot of folks that I mention it to are like ‘oh yeah I’m in a book club, we drink wine, we don’t really read the book.’” For Kent’s club, “this is English class over dinner.” In her experience, “the folks I’ve had in my book club really like that. They really like digging in and pulling it apart.” The Brew Pub Book Club has moved to Zoom, which Kent welcomes. She enjoys opening up the opportunity to friends who don’t live locally. Kent notes the club is a bit “all over the place” with their book selections. Here is a sampling of just some of the titles they’ve read: Celeste Ng’s Little Fires Everywhere,  Carmen Maria Machado’s Her Body and Other Parties, Madeline Miller’s Circe, and The Girl with all the Gifts by M. R. Carey. At the time of our conversation, the club was reading Paul Tremblay’s The Cabin at the End of the World. “He’s a local author I’ve heard great things about.” If you’re interested in starting a book club, I recommend Kent’s article, “How to Start—and Sustain—a Successful Book Club.”

Kent is currently querying a novel called Reconstructing Lasky. For this novel Kent drew on inspirations from her trips to Cape Cod during her childhood. “We used to vacation on the Cape and there was this old World War II Liberty ship that they dragged to Cape Cod Bay and left for target practice back in the fifties and sixties and then just left it to rot.” On her family’s trips to Orleans in the eighties and nineties they would go to a beach on the bay side where you could view the ship in all its glory. “It became a piece of local legend and local folklore.” The premise for the book came to Kent while she imagined the people who might have served on the ship. The novel takes place around Josh, a Freedom Trail player, a Revolutionary War reenactor, and the grandson of one of the men who served on the ship. At the start of the novel, Josh’s grandfather passes away and Josh goes to the Cape to begin going through his grandfather’s possessions. He eventually discovers a narrative his grandfather left him about his time in World War II. The novel grapples with nostalgia, history, and how the past influences and shapes the present, themes that are apparent in Kent’s writing. Aside from locale there are certain themes Kent returns to. “I love history, nostalgia and how history impacts us.” Josh, the character in her novel, has a moment where he walks along the Freedom Trail and remarks on how the past and present continue on in parallel. “I feel that way about Boston. It’s probably why I love it. You can stand on a street corner and be like ‘who stood here?’ Our past affects our future and we are all kind of living the past and the present in parallel.”

Kent, an Athenæum member since 2017, “wants to give a special shout out to the New England Seminar Book Club,” one of the BA’s many discussion groups. “That has been my main plug into the Athenæum.” Kent wanted to get involved with the discussion groups and her interest in Boston literary history drew her to the New England Seminar. “The leader, her name is Peg, just welcomed me in. I had read the book and there are a lot of passionate people who are very vocal in that group whom I absolutely love. I remember at one point during the group Peg sensed I wanted to say something and she kind of put her hand up to the other people to give me space to contribute. I’ve gone pretty much every month since then.” Kent enjoys stopping by the Athenæum and seeing her peers from the group. If you’re interested in joining the New England Seminar or any one of our other discussion groups you can visit this link for more information.

You can find the Boston Book Blog at www.bostonbookblog.com, or on Twitter and Instagram @bostonbookblog. Her personal website is www.jessicaakent.com if you’re interested in reading some of her short stories and other freelance work. If you are in the Athenæum, you might find her on the ffth floor, first alcove to your right, surrounded by old Puritan books and a wonderful view of Park Street and the Granary Burial Ground.