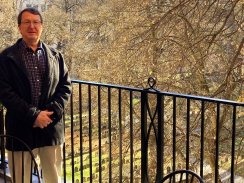 John G.S. Hanson was born and raised in Williamstown, Massachusetts. He studied English at Harvard College and went on to earn his MBA from Georgetown Business School. He worked for 25 years in management consulting and has spent the last six years as an executive at Akamai Technologies, an internet services company in Kendall Square.

Q: How did you find your way to the Athenæum?

JH: I gained my proprietor’s share the old-fashioned way: I inherited it! My family has been a shareholder since, I think, 1826. Share 212 dates back to my great-great-great grandfather Doctor Edward Reynolds.

It’s interesting, a fair number of the family members who have held that share number in the past are not particularly scholarly. They’re certainly not writers. They were always serious readers. They were the classic profile of a nineteenth-century Bostonian family. Nonetheless, I consider myself very fortunate to have received the share. It brought me in here, and I haven’t left.

Q: Have you ever looked at any of the records from the Athenæum? To circulate books we had a big ledger for the year and each person had a page with the books they checked out.

JH: I had not heard of that but I should absolutely cross reference a few of my ancestors. Alfred Greenough held the share from 1838 to 1863, and he was a serious book collector. In fact, a few years ago I donated his copy of The Works of Lord Byron to the Athenæum.

Q: It is interesting to see what people read. We have digitized them as well. That can be handy when you want to goof around at home. It is also a lot of fun to come in and look at the page.

JH: That resonates with one of the stories I stumbled across in my research about a colonial woman who was a subscriber to a lending library. I was reading this in a secondary source and the record of what she had checked out was a sort of ‘who’s who’ of devotional writers who show up in epitaphs.

The project, at its best, brings to life the reading habits of these early New Englanders. I learned that you just can’t overstate the importance of Isaac Watts in their devotional reading. I have these images of farm wives who may have just 20 minutes to spare during their busy day. They sit down to read their Isaac Watts, or their James Hervey, or their Edward Young and put their favorite quotations in their commonplace books. There is a world of individuals incorporating their reading into their religious thinking, into their attitudes towards life and death. It makes the epitaphs much more than sentimental doggerel.

Q: That’s true. It had meaning. It was internalized.

JH: It was internalized and intentional. Someone made this point to me after I gave a talk. I hadn’t realized it, but it’s true. The early stones, they weren’t bought off a rack. They weren’t bought off a shelf. Someone chose the verse. In many cases, we won’t know who did the choosing. Someone paid to have this carved in stone so that there would be a permanent expression. You have to respect that.

Q: What first attracted you to this topic?

JH: It’s a great question. I’m not sure I can answer it. I’m sure I’m not the only writer who can’t quite explain where it all started. I say in the book it started with trips. I’m sure my mom was just trying to get us out of the house. My father would put a few of us kids in the car and go for a drive to these old cemeteries. I think he liked the historical angle—the names, what you could learn about the professions or the pecking order based on how richly carved the stone was. I was a reader, so I became fascinated by these texts.

My interest went into abeyance for a while but it started to come back when I found an old notebook. What kicked in then was “where did these texts come from?” If you find John Milton quoted out in the middle of what was then a small frontier town, you have to start asking yourself: how did that text get from New York or New Haven or Boston, out there? It just became this thing. You find a new writer, that’s exciting. You find a new expression. It’s a search for “how did this fellow or this woman get here?”

Q: You mentioned you found an old notebook. What is this old notebook? When does it date to? And do you still have it?

JH: I still have it. When I was ten years old, I was a very good, straight-A student, except for penmanship. I would squat down in front of graves in Lanesborough, Massachusetts and Vermont, on field trips with my dad.

I found it when clearing out my parent’s house, after my father’s death but before my mother’s. That time of life when thinking about the great exchange of worlds was a little bit more relevant than it was when I was ten or 11.

I will tell you, because you’re probably going to ask, that the Athenæum as a resource came into play several times in this. The first was because of the superb collection of town histories. Many of them have short sections on the inscriptions of the founder’s gravestones. Other books are anthologies of all a town’s inscriptions, like Samuel Green’s wonderful Groton Transcriptions, which I first found at the Athenæum. I now own one hardback and one paperback version of it.

I also tried to learn and pass on to the reader a bit about the religious scene of the times. Many people will read Jonathan Edwards’s Sinners in the Hands of an Angry God once or twice and then move on with their lives. In the collection at the Athenæum, you have a wonderful selection of old sermons, every one of which will tell you the exact same thing. There is this notion that you and I are only sitting here talking because it pleased God not to drop us into a furnace an hour ago. Therefore, what have you done today to prepare yourself?

I mention in the book, one pleasant summer afternoon, I was at the Athenæum reading these blood-curdling sermons, and I thought, “Imagine you’re sitting in a drafty farmhouse in 1780, and that’s to improve your soul…” Back then, it was very important to hold those documents in one’s head. These same pamphlets would have been sitting in ministers’ libraries, and in these small farmhouses.

Q: I notice on your website, you mention ‘my collection.’ Obviously, you have not hefted up these tombstones and taken them home! What is the collection?

JH: I collect contemporary editions containing the works from which these epitaphs were sourced. I don’t claim by any means that these particular copies were extant in the towns of New England at the time, but I try to get editions that could at least have plausibly been in circulation. I have my copy of Addison’s Rosamond! Not many people do. I have a beautiful edition of Edward Young’s Night Thoughts. It’s a great big block of a book.

Q: At what point did your interest in epitaphs become something that you write and talk about?

JH: Great question. When it was still just a hobby, it dawned on me that I can’t just go through life with index cards of epitaphs. I started creating a Word document, and I began thinking of how to organize it. It is arbitrary and a bit personal, but there was a taxonomy.

At the simplest level there are epitaphs that recur all the time. Things like “friends and physicians could not save this mortal body from the grave,” or “afflictions sore, long time I bore, but physicians in vain.” Which appear everywhere! Those were obviously composed by someone, anonymously composed and distributed. Then there are ones you can identify with a little research, such as Pope, Milton, and Young. Scripture, you can always tell.

The Word document is what got me interested in book collecting, which historical associations got wind of. The Association for Gravestone Studies have been wonderful mentors to me. Same with the American Antiquarian Society. They said “Oh! You should give a talk on this!” Next thing you know you’re giving a talk and then someone says “you should write that up!” So you do an article, and then someone says “Okay! Where’s the book?”

Q: What were the great struggles of writing articles, and eventually a book, about gravestones? The great joys?

JH: One challenge is the condition of the old gravestones. Two and a half centuries of neglect, weather, acid rain, and sometimes vandalism have rendered many of them illegible. The other challenge is that for too long these epitaphs were dismissed as mere sentimental doggerel; well-intentioned professional and amateur genealogists have published many volumes of gravestone transcriptions, though they all too often (for my purposes) content themselves with just the name-and-date information, ignoring any verse further down the stone.

These are trivial compared to the joys of identifying an obscure source text for a verse, whether in an Isaac Watts hymn or the work of a long-forgotten eighteenth-century poet. Time and again, my work has brought to life for me how the books and reading habits of these early rural Congregationalists informed their faith and helped them express their deepest feelings about life, death, and eternity on the occasion of the passing of a loved one.

Q: When you travel are you constantly taking side trips through graveyards?

JH: Yes, absolutely. My wife has grown accustomed to the squeal of breaks. Many graveyards are still right in the middle of town where they always have been. In some cases, like Monterey, Massachusetts, what used to be the center of town is now a second growth forest. The graveyard just sits there a good 25–30 yards off from what is now the road. There is no structure around it for ¾ of a mile. You can find these things on old maps. For example, in 1976, Berkshire County did a wonderful edition of all known burial grounds in the county, but it is 45–50 years old. To find some of those off the beaten path is tricky.

Q: Any projects on the horizon you’re able to talk about here?

JH: This project is just getting started! My collection of epitaphs keeps growing and I keep discovering new sources. I am trying to understand more of the role of the carver in sourcing and suggesting appropriate verses. There is so much work to be done looking at the probate records of carvers, ministers, and individuals to see how often the books quoted in a graveyard appeared in the libraries of the townspeople.