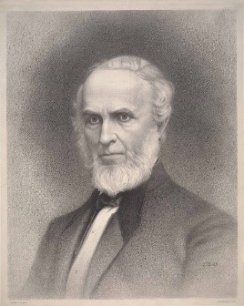 “America being what it is, and New England being what it is, it is hard to see how we could have managed to get along without Whittier.”-Edward Wagenknecht John Greenleaf Whittier was a renowned writer whose numerous works about Quakerism and abolition earned him a place among the esteemed Fireside Poets. Over his 84-year life, Whittier used his ability as a skillful writer to become a political activist and fight for the anti-slavery cause. He loved his family and demonstrated his commitment to his parents and siblings. Whittier’s high ambitions as a political activist and a dedicated Quaker, abolitionist, son, and brother are reflected in his poetry, essays, books, and pamphlets.

Whittier was born in 1807 to Abigail Hussey and John Whittier on a humble farm in Haverhill, Massachusetts. As a child, Whittier suffered from poor health and could not work on the farm. Instead, he spent his time reading and writing. Whittier mainly had access to Quaker texts that confirmed his belief in Quakerism. A family friend introducing him to the poetry of Robert Burns sparked his desire to become a poet. His dedication to his studies paid off when he was just 20. Unbeknownst to Whittier, his older sister Mary sent in a poem of his to the Newburyport Free Press. William Lloyd Garrison, the editor at the time, published the poem, starting Whittier’s career as a published poet. Whittier continued to write poetry and Garrison continued to publish it, beginning a lifelong friendship. Garrison saw potential in Whittier and strongly encouraged him to attend school to perfect his talents. Determined to attend a new academy in Haverhill, Whittier worked as a shoemaker, a teacher, and an accountant to pay for the tuition. Whittier enrolled in the academy as an already-published poet and quickly earned himself the reputation as a prodigy. Whittier’s career continued as a writer in editorial positions at The American Manufacturer and The Haverhill Gazette, but due to his poor health he needed to work from home. However, Whittier could not remain homebound for long. In the early 1830s, he quickly began establishing himself as an abolitionist.

Quakerism heavily influenced Whittier’s anti-slavery beliefs. The Society of Friends, the formal name of Quakers, were the first organization to take a collective stand against slavery in America. Whittier adopted the same passion for abolition. He traveled a great deal in his twenties lobbying for abolition and was often met with angry, violent, raucous crowds. He strongly believed in non-violent resistance and faced the mobs with composure. He demonstrated allegiance to the abolitionists through tactful and skilled literature such as the pamphlet Justice and Expediency (1833). Shortly after its publication, Whittier traveled to Philadelphia and participated in founding the National Anti-Slavery Society as a delegate. At just 26 years old, he was the youngest participant. Despite Whittier’s pacifism, he still fought back with great intellect and wit. In fact, when Pennsylvania Hall, an important abolitionist meeting house, was burned down by rioters, Whittier proved himself smarter than all. He disguised himself with a wig and long jacket and began to mingle with the mob. Before the fire destroyed the building he saved his own papers. At 26 years old, Whittier could outwit the best of them.

During this period of his life, Whittier’s poems focused entirely on the anti-slavery cause. Later in life, he reflected on his writings prior to Justice and Expediency and expressed disappointment in these poems. Whittier felt he was simply experimenting with poetry and he finally found his calling as an abolitionist writer. Whittier continued to write and travel to spread abolition beliefs. Around 1840, Whittier’s travel began to slow and he again worked from home as that was more suitable to his health.

In 1857 Whittier, along with Francis H. Underwood, Henry Wadsworth, Harriet Beecher Stowe, and fellow Athenæum members Ralph Waldo Emerson and Oliver Wendell Holmes, founded The Atlantic Monthly. The focus of the magazine was originally on entertaining essays. However, it quickly morphed into a publication focused on contemporary political issues, such as the anti-slavery movement. The Atlantic Monthly became Whittier’s main publisher for many years. The Atlantic has stood the test of time and remains a fine literary publication.

Snow-Bound: A Winter Idyl is Whittier’s most famous work. The poem was published in 1866 during a tumultuous time in Whittier’s life. In 1857, Whittier’s beloved mother Abigail passed away. Elizabeth, Whittier’s favorite sister, passed away in 1864 leaving his home empty. Whittier experienced a newfound sense of loneliness and loss. He wrote Snow-Bound in a period of grief and longing for the past. Snow-Bound was based on his childhood home in Haverhill, Massachusetts, and the home is open for visitation today. The poem also brought Whittier great financial security for the first time in his life. A year after Snow-Bound was published he wrote The Tent on the Beach, which was also received extremely well.

Whittier’s gentle nature and kindness extended to animals. He had many pets he loved dearly. Along with many cats and dogs, he had a pet squirrel named Friday, a bantam rooster, and a parrot named Charlie. Friday the Squirrel was known to sift through Whittier’s pockets and dishevel papers on his desk in search of nuts while Whittier worked. Charlie the Parrot nipped at anybody’s pants that rose above the ankle, ensuring their appearance remained tidy. Whittier was deeply saddened by Charlie’s passing. Shortly after, Whittier got a bantam rooster that would perch on his shoulder and loved being buttoned up in his jacket. Whittier even trained the rooster to wake up his niece by crowing in her room at the set time.

Whittier was 84 when he died on September 7, 1892. He spent the last years of his life in Danvers, Massachusetts at the Oak Knoll estate owned by his cousins. At Oak Knoll, he wrote poetry, advocated for political causes such as woman’s suffrage, and fed squirrels just as he had done all his life. Whittier visited his friends and when his health prohibited him he maintained relationships through letters.

John Greenleaf Whittier is remembered by those who knew him as a man of integrity, decency, and kindness. When he died, The Atlantic published a lengthy article written by George Edward Woodberry. About Whittier, Woodberry writes, “The secret of his vogue with the plain people is his own plainness. He appeals directly to the heart, as much in his lesser poems as in those which touch the sense of right and wrong in men with stinging keenness, or in those which warm faith to its ardor.”

You can explore more about the life of John Greenleaf Whittier and his poetry in the Athenæum’s collection.​