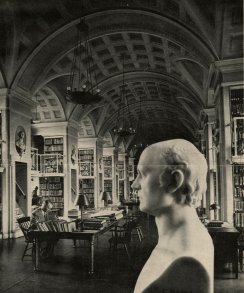 John Phillips Marquand (1893–1960) ultimately became known for his satires of the New England upper class and their traditions. He spent adulthood trying to regain his place among the deeply rooted and financially comfortable that he felt he lost early in his life. Many of his novels featured characters based on himself or relatives from Newburyport, including Wickford Point, H.M Pullham, Esquire, and the Pulitzer Prize winner The Late George Apley. He wrote about Boston for LIFE in 1941, “[I]ts past and its present make a perfect unity, I believe, than has been achieved by any other city in America.”

He, however, was born in Delaware. His father, Phillip Marquand, had a job as a civil engineer at the American Bridge Company in Wilmington. His mother, Margaret Fuller, was the niece of the transcendentalist writer of the same name. Marquand did not have much respect for this branch of the family, commenting later: “Like many other Fullers including her father, she was an intellectual snob, imbued usually with a Puritanical self-righteousness, and utterly devoid of humor.” Instead, Marquand was most influenced by his father’s maternal branch, The Curzons. Once Phillip Marquand lost most of his fortune in 1907 and euphemistically “engaged in various lines of work” across the continent for the next six years, John Phillips Marquand was left in the care of his maiden Curzon aunts in Curzon’s Mill in Newburyport. The shy, solitary Marquand carried scars from this disruption throughout his life.

Harvard simultaneously accepted and rejected Marquand, a middle class boy from a middlebrow public school. Though he originally paid for boarding school in New York, Marquand’s father’s later unemployment exiled his son to Newburyport High School, where Marquand languished as he repeatedly failed Harvard College’s entrance exams. Once Marquand matriculated, both literary and final clubs snubbed him and the Harvard Crimson declared him out of the “competition because he does not know how to write.” His rejection by the literary Signet Society still pained the future best-selling novelist enough that his characters in 1939’s Wickford Point are similarly rejected from the Vindex Club, with his unconnected Joe Stowe predicting, “Yes, they’ll be sorry someday.” Marquand found a home on the staff of the Harvard Lampoon,yet the young man’s continuing misery drove him to finish Harvard in three years.

His fiscally unstable adolescence led Marquand to pursue the most practical path: “I selected writing because it was the only lucrative endeavor in which I was any way qualified.” He first embarked on a career in journalism (beginning at the Boston Transcript, then the New York Tribune), then in advertising (at J. Water Thompson), ultimately switching to fiction at the Saturday Evening Post. Success came almost immediately. From 1922 to 1940, Marquand sold around 100 short stories. His spy series for the Post about a Japanese detective named Mr. Moto turned into a popular series of novels and several movies starring Peter Lorre. Apley became a play and a feature film. Despite gaining some prestige through his satirical novels, Marquand never earned the same recognition as the “greatest” writers of the Lost Generation. Continuing to write for the rest of his life, Marquand’s already strong sense of bitterness increased. His insecurity was not unfounded: many of his novels, though best-sellers and Book of the Month Club selections in their time, were out of print by the beginning of the twenty-first century.

Though he had a steady income, Marquand, like his father, was unable to be a steady presence in his children’s lives. Marquand’s marriages to Christina Sedgwick (1922–1935) and Adelaide Hooker (1937–1958) ended in divorce. Himself an only child, Marquand had five children with his two spouses. His desire to distance himself from his wives strained his relationships with the younger Marquands. The last line of his last novel Women and Thomas Harrow is especially telling: “In the end, no matter how many were in the car, you always drove alone.”

The author’s relationship with the Athenæum extended almost half of his lifetime. He became a proprietor of the Athenæum in 1928 when he was joining clubs in Boston as a somewhat successful writer and Sedgwick in-law. Marquand references the Scruples Room of the Athenæum in Apley when the title character reacts to his daughter’s dinnertime discussion of Freud by planning to suggest the controversial psychoanalyst’s works “be put into the Locked Room.” John Phillips Marquand owned share number 459 until his death in 1960.