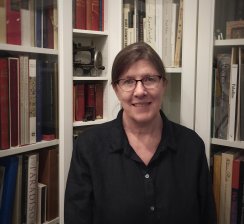 “It was the making of me,” said Laura Davidson, about encountering medieval illuminated manuscripts in the British Library (then located within the British Museum). Awed by these books, she returned repeatedly during her week-long visit to admire and study these treasures on display.

Davidson has loved making books since childhood. Born in Indiana and raised in Michigan, Laura attended Michigan State University, where she followed her two older sisters until realizing that an art school suited her better. She considered going to Cleveland but ultimately chose the Kansas City Art Institute, where she received her BFA. She had thought she would become an illustrator of books, but in searching for the best academic fit she found the most amenable and inspiring mentors by choosing a major in fiber. That spirit of finding her way expresses the sum of Davidson’s life and work. Her final requirement for the degree involved paper-making, which she has not done since graduation; however, the many materials she uses—paper, pencil, watercolor, gold leaf, silver point, copper, vinyl, and so many others, too many to list—illustrate her method; she knows what she wants to make and finds a way to do so, not necessarily using the traditional method. As an example of her ingenuity, Davidson wanted illuminated pages in her work, so she developed her own method for Fort Port Illuminated, an artists’ book now among the Athenæum’s special collections.

Her parents have supported her decision to live a life of creativity—creating and supported by creating—even though many parents would have cringed at the risk of making a living by one’s art. Her father travelled to Kansas City with her when she chose art school; he said he would have liked to attend too. After graduation, she accompanied her parents to Italy where her father was facilitating the use of computer design in car manufacture. She slept on a cot in her parents’ hotel room and was so inspired that later she “kickstarted” her own return to Italy by letting anyone who had ever shown any interest in her work know that if they gave any amount to help her travel, she would in turn give them a drawing. When she first arrived in Boston, she put her art school education in fibers to good use by painting fabric for payment. She would paint silk in the morning, and then work on her own pursuits. (Another artist would then make then the fabric into a dress.)

She had studio space—which occasionally was living space—in the area where she eventually settled into an artists’ cooperative. Her parents visited and stayed with her, even in her early, unconventional studio. She could tell they wondered at her living arrangements, but they did not criticize.

Her works are among the holdings of world-class institutions such as Harvard University, the Library of Congress, Michigan State University, as well as other universities. The Athenæum holds an impressive number of Davidson’s works, but her first interaction gave her mixed messages. In the mid-1980s, she submitted an item for a show but after its acceptance, she dropped it off only to receive a call informing her it had subsequently been rejected and must be picked up. However, that would not be the last word: almost a decade later, Joan Nordell, director of development at the time, was also a collector, and she met Davidson at an exhibition at Harvard’s Houghton Library. That connection brought Davidson back into the Athenæum’s orbit so that she applied for and received a 1996–1997 Mary Catherine Mooney Fellowship to study the Athenæum’s Nuremberg Chronicle as inspiration for her own artistic works. The arrival of a child created new priorities, but as her daughter has grown, Davidson has found time to return to the building.

She enjoys listening to podcasts as she walks up the hill from her Fort Point Studio where she and her partner Gabrielle, a potter, have lived for over 25 years. Davidson claims her time at the Athenæum “fortifies” her. Here she enjoys studying large art books, too large to carry home, in the quiet and contemplative spaces. This allows her to winnow her own collection of large art books to those most essential to her work and pleasure, to find inspiration everywhere—through travel, in great works of art as well as ephemera—and to make her own way.