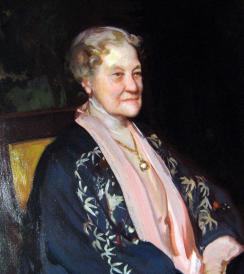 Lilla Cabot Perry (1848-1933) is best known as an Impressionist painter. She was a published author as well, writing four volumes of original poetry and a translation of classical Greek verse.

Born January 13, 1848 to Dr. Samuel Cabot, a surgeon, and Hannah Lowell Jackson Cabot, Lilla Cabot was descended from two of Boston’s most prominent families. Her father was a Boston Athenæum proprietor, as were several relatives on her mother’s side, affording Lilla Cabot lending privileges and access to the library.

Raised in Boston, Lilla Cabot first studied painting in 1867 while traveling in Europe with her family. In 1874 she married scholar and Harvard professor Thomas Sergeant Perry. The Perrys’ Marlborough Street home became a literary salon where many of the city’s foremost writers and artists gathered, among them William Dean Howells and Thomas Perry’s boyhood chum Henry James.

In 1886 Lilla Cabot Perry resumed her art studies, this time at the Cowles School of Art in Boston. In 1889 the Perrys traveled to Giverny, France, joining the community of artists then coalescing around Claude Monet. The couple returned often to Giverny, and Mrs. Perry became a vocal proponent of Monet’s work through her lectures at the Boston Art Students Association. Her first solo exhibition was held at Boston’s St. Botolph Club in 1897, inaugurating a long and successful career. Along with portraits, which provided an important source of income for the family, Perry painted landscapes and domestic scenes, often of her daughters Margaret, Edith, and Alice.

In 1898 Professor Perry became chair of English Literature at Keiogijiku College in Tokyo. The Perrys lived in Japan until 1901, during which time Mrs. Perry painted over eighty pictures. On returning Boston, the Perrys resumed residence at Marlborough Street. In 1903 they purchased a farmhouse in Hancock, New Hampshire. The summer home eventually became a year-round residence as the Perrys settled into village life in the picturesque New Hampshire foothills. Thomas Perry died in 1928. As she entered her eighties Lilla Cabot Perry continued to paint prolifically until her death on February 28, 1933. The Perrys’ ashes are buried at Pine Ridge Cemetery in Hancock.

As a writer, Lilla Cabot Perry is primarily known as the author of “Reminiscences of Claude Monet from 1889 to 1909.” First published in the Magazine of Art in 1927, it remains a key resource for Monet’s biographers. Though she published five volumes of poetry, her work never attracted widespread notice or popular acclaim. As a painter, however, Perry enjoyed financial success as well as critical praise and the esteem of her peers. A founding member of the Guild of Boston Artists, Mrs. Perry was honored with a silver medal at the Massachusetts Charitable Mechanics Association Exhibition of 1892, and bronze medals at the 1904 St. Louis Exposition and the 1915 Panama-Pacific Exposition in San Francisco. Appreciation for Perry’s work has grown in the decades since her death. A 1969 retrospective at the Hirschl and Adler Galleries helped reestablish her place in the ranks of American Impressionists and in March 1982 her paintings were the subject of an exhibition at the Boston Athenæum.

From the Garden of Hellas: Translations into Verse from the Greek Anthology (1907)