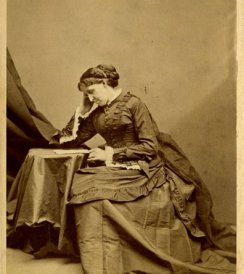 “Her place is in the forefront among those saintlike women who saw a stern duty lying very near them, and courageously assumed it to their own honorable profit and renown”. – The New York Times, October 14, 1889

Louisa May Alcott (1832-1888) was born in Germantown, Pennsylvania to parents Amos Bronson Alcott and Abigail May.  Abby, called “Marmee” by her four future daughters, grew up in Boston, well-read and well-educated.  While visiting her brother, Reverend Samuel May, in Brooklyn, Abby met Bronson in 1827.  Bronson had been teaching in Connecticut, but lost his position and May invited Bronson to come and visit him.  May, who was “an educational reformer himself…arranged a position for him at the Charity Infant School in Boston.”  When Abby found out about Bronson’s new position in Boston, she applied to be his assistant.  But, they were to be joined in an entirely different way: when “the penniless Alcott refused to hire her as his deputy, she proposed marriage instead.”  They were married in Boston, at Kings Chapel in 1830, and so began their tumultuous life together.

In 1831, Bronson was offered a new teaching job and the couple moved to Germantown.  Their first child, Anna was born in 1831, and Louisa came next in 1832.  In 1834, the Alcott family moved back to Boston, and founded the School for Human Culture (also known as the Temple School) with the help of Elizabeth Palmer Peabody.  The Alcott’s third daughter was born in 1835, and named Elizabeth in Peabody’s honor.  In 1840, after the controversies of the closing of the Temple School, the Alcotts resettled in Concord, where their fourth daughter Abigail May was born.  Louisa, who had been educated at the Temple School, continued her education with her father at home, which was supplemented by the teachings of local family friends Henry David Thoreau and Ralph Waldo Emerson.

When Louisa was 11, in 1843, the Alcotts, with the help of Charles Lane and Samuel May, purchased and moved in to their famous farm, Fruitlands, in nearby Harvard.  After a disastrous few years, Abby’s inheritance came through and the family moved back to Concord and purchased their new home, Hillside, where Louisa began to practice her writing skills.  In 1849, Louisa wrote her first novel, The Inheritance, which was to remain hidden amongst her papers at Harvard University’s Houghton Library until two professors stumbled upon the 150-page manuscript in 1996.  Previously, scholars had believed Louisa’s first novel was Moods, published in 1864.  The Alcotts remained at Hillside, until Abby sold the property to Nathaniel Hawthorne in 1852.  In 1853, they moved to another Concord home, Orchard House; the Alcotts lived at Orchard House until 1877.  It was at Orchard House where, in 1868, Louisa wrote her classic family tale, Little Women, based on life at Hillside.

Like her mother, Louisa was a staunch abolitionist and supporter of women’s rights, and she “demanded both the abolition of slavery and political recognition of woman’s rights”.  When America’s Civil War broke out on 1861, Louisa, at the age of 30, was determined to be part of the war effort.  In 1862, Louisa came to Washington, D.C. to work in the Union Hotel Hospital; although married women were usually recruited to be nurses, some strings were pulled for Louisa.  Her “friends and family connections were as influential politically as they were in writing and publishing, and they helped her join the nursing service.”  The letters Louisa wrote home and the journal she kept became the basis for Hospital Sketches, later published in 1863, the same year Louisa contracted typhoid and was discharged from service.  She eventually recovered, but the mercury-based medication she took for the fever caused “lifelong debilitation; she thereafter had painful joints, swollen limbs, and headaches that would not be soothed.”  It was during the years during and after the war that Louisa’s writing was at its prime, from her well-known young adult novels to her lesser-known thrillers.

During the 1860’s, Louisa led a “double literary life [which] was a well-kept secret for almost a century”, renting out a room in Boston to write “thrillers whose themes include sexual power struggles, narcotics addiction, murder, revenge, and feminist triumph” under the pen name A.M. Barnard.  Alcott’s thrillers were published by Frank Leslie in his weeklies and monthlies (Frank Leslie’s Illustrated Newspaper, Frank Leslie’s Chimney Corner, and Frank Leslie’s Lady’s Magazine).  In the same decade, Louisa also published stories in The Atlantic Monthly, Flag of Our Union, Putnam’s Magazine and the children’s serial, Merry’s Museum.  At the end of the decade, in 1869, Louisa was granted access to the Boston Athenæum by her uncle, Reverend Samuel May, and so became what we call “a Reader.”

Although we know her as an author, Louisa worked as a maid, a seamstress, a teacher (which she apparently had an affinity for, but did not enjoy), and a governess.  Louisa “appointed herself Alcott breadwinner, and to this end tried every means then available of making money” to support her family, and “[i]t was usually, even in late years, the need of money that impelled her to write”.  She also had dreams of becoming an actress, and although she never acted professionally (save for “as an amateur in performances for the benefit of the Sanitary Commision”), she remained “a constant theatre-goer all the later years of her life.”

Just two days after Bronson died in March of 1888, Louisa died from a cold that developed into spinal meningitis.  She was buried in the family plot in the famed Concord, MA cemetery, Sleepy Hollow.  In an article published in the New York Times on March 7, 1888, the author notes “[t]he most widely-known and most popular of American female authors will be sincerely mourned by thousands of children, and thousands of children of larger growth, wherever the English language is spoken, and by all who in other languages have read translations of her writings”.

Behind a mask : the unknown thrillers of Louisa May Alcott (Library of Congress, PZ3.A355 Be)

“Learn about the Alcott’s and Orchard House”.  Retrieved from http://www.louisamayalcott.org/alcottorchard.html