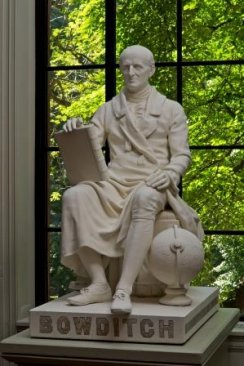 More than 200 years after its initial publication, The New American Practical Navigator is still considered by many to be “the seaman’s bible.” Affectionately nicknamed “the Bowditch” for its original author Nathaniel Bowditch, the guide revolutionized navigation techniques, which at the time were complex and often ignored by less skilled mariners—much to their detriment. Bowditch’s approach corrected many errors to the book’s predecessor The New Practical Navigator by John Hamilton Moore, added information, and simplified Moore’s language so even sailors with minimal education could understand it.

Bowditch, whose likeness looks out over the second-floor Long Room (read about the sculpture here), was born in Salem, Massachusetts on March 26, 1773 to parents Mary and Habakkuk, a cooper. The family was not wealthy, and Bowditch was forced to leave school at the age of ten despite his obvious interest in and aptitude for mathematics. Once withdrawn from school, Bowditch began an apprenticeship at Ropes & Hodges (a company that sold shipping supplies and equipment) where he worked as a clerk. Though he wasn’t formally enrolled in school during that time, he managed to teach himself algebra, calculus, physics, and Latin.

Having finished his apprenticeship, Bowditch set off for the first of five voyages, completing his final expedition as shipmaster. During these journeys between 1795 and 1803, Bowditch began developing his own methods for determining longitude, the skill taught in Hamilton’s Practical Navigator, the skill necessary for sailors to learn. Bowditch’s own methods improved upon Hamilton’s, and as he taught his techniques to his fellow shipmates he began revising Hamilton’s standard text. The first two revised editions were published in 1799 and 1800, and The New American Practical Navigator, which markedly deviated from the original, was published in 1802 by Edmund Blunt of Newburyport, Massachusetts.

After Bowditch’s last voyage to Sumatra, he settled down at the age of 30 to married life with his second wife—he had become a widower while at sea and returned home to marry his cousin Mary—and took up the post of president of the Essex Fire and Marine Insurance Company of Salem until 1823. He then worked as an actuary for Massachusetts Hospital Life Insurance Company of Boston, where he remained until his death in 1838.

Though his feet remained planted firmly on land for the rest of his life, Bowditch continued his revisions of the Navigator and wrote extensively on the subject of celestial mechanics. He was offered professorships many times but refused, preferring to remain in the insurance industry and study independently. In recognition of his many contributions to the field, Harvard College presented the legendary navigator with an honorary Master of Arts, and in 1816 made him an honorary Doctor of Laws. In 1867, the U.S. government purchased the rights to “the Bowditch” and continues to publish the title, revising to accommodate technological advancements.

Bowditch’s eulogy, given by the Salem Marine Society, affirms what both admirers of Bowditch the man and followers of Bowditch the book still know to be true: “As long as ships shall sail, the needle point to the north, and the stars go through their wonted courses in the heavens, the name of Dr. Bowditch will be revered as of one who helped his fellowmen in a time of need, who was and is a guide to them over the pathless ocean, and of one who forwarded the great interests of mankind.”

Nathaniel Bowditch is buried in Mount Auburn Cemetery in Cambridge. His Salem home is a National Historic Landmark.References