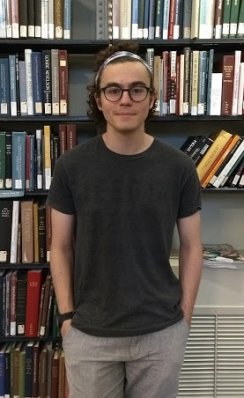 LGBTQ activist, music aficionado, and journalist Nicole Collins found her way to the Athenæum by way of an interest in Latin and has been volunteering in Reader Services since August 2016. Born in Morristown, New Jersey, and raised in the suburbs of Chicago, Nicole moved to Boston in 2016 and graduated from Brookline High School in 2018. She will attend Carleton College in Northfield, Minnesota.

In our interview, Nicole spoke with her characteristic blend of amiability and ironic humor about the pleasures and pitfalls of journalistic writing.

Q: What sort of writing do you do?

NICOLE COLLINS: I write for The Rainbow Times, which is a Salem-based LGBTQ newspaper. I was grateful to find them because when I started there, I was struggling to come out to people as trans. I went by Nick and had a thick goatee and it was difficult to come out to anybody. The Rainbow Times was one of the first groups of people I came out to, and they were super welcoming and that was awesome. I’ve been writing for them as an intern since January, and I’ve written a couple articles each month.

I also write for Sound of Boston, which is the biggest music blog in Boston. I’ve always been passionate about music, but only recently, since April, have I been listening to music to critique it and think about it critically. I decided, why not combine music and journalism? And it’s one of my favorite things I do.

Q: What are the most exciting stories you’ve covered, or things you’ve gotten to do as a journalist?

NC: For The Rainbow Times, one of the most exciting things was covering “Gays Against Guns at the March for Our Lives.” It was timely and it got the go-ahead to be a much longer article. The people I interviewed for it were responsive. Those are the most fun articles, when people actually respond to me and say “let’s get this article going.”

Another was the first story I covered. My first day at The Rainbow Times, the first murder of a trans woman in the US in 2018 was reported in Massachusetts. It was an important article and super urgent, so I put off a lot of homework to write it, but it was worth it. It was a respectful and meaningful article. I think it was one of the best ones out there, too, because The Rainbow Times writes longer articles rather than short briefs like The New York Times writes, and we got quotations from friends and family whereas The New York Times got statements. I was proud of that.

I’ve only done a few things for Sound of Boston so far. One of the best things about it is that they get you concert tickets if they get the OK from the producer or label. I recently got to go see the Punch Brothers, one of my favorite bands. I went to the desk and said, “I’m a journalist,” and they gave me these special press passes, and it was the coolest thing. It was fun to be given the leeway to write pretentiously about music and get to go to a concert for free.

Q: Do you think pretention is inherent to writing?

NC: I think so. Talking to other people about music, they’ll describe it as “catchy” and “good,” but you can’t write like that in a publication. In order to get anywhere with a music review, you have to say pretentious things, like the music is “inspired” or “curious” or “benevolent.” I hate that, but it’s the way you have to go. It’s better once you embrace it. I write much better and more quickly now that I don’t think twice about whether something sounds pretentious. At least a little pretentiousness is required to write meaningful stuff.

Q: What do you see yourself writing in the future?

NC: More journalism. I hope to continue writing articles because I love it. And I’d love someday to work a fast-paced Reuters-type job where you go in 9 to 5 and you’re constantly writing little briefs. That sounds awesome to me. Writing for Rolling Stone is one of my career goals. I hate publications that assign numerical ratings to music. It’s sort of like clickbait in a way, when they give a numerical score. You can’t quantify how good music is like that. But for Rolling Stone, you write about the good parts of the music, give a summary of what’s going on, and then you leave it so people can decide for themselves whether they like it.

Q: How would you describe your approach as a journalist?

NC: I’ve been told I’m way too positive when I do music reviews. I think that’s a good thing, though—that’s one of the better things to have wrong with your reviews. My approach is essentially being honest but being positive; it’s possible to be both. People are too negative nowadays, and I think there is always a good way to focus on the positive.

And with regard to other journalism: do your research. There’s too much fake news out there. And be respectful, especially when someone dies. News is too fast these days.

I’m glad that I’m familiar enough with it now that I can look at what I’m doing objectively and say “this is bad about journalism, this is good about journalism, and this is what I can do to improve,” instead of being too intimidated to change anything.

Q: What do you find most satisfying about journalism?

NC: At first it was just seeing my name in the byline. That’s what a lot of people say. I was talking to this other journalist who is 15 years in and he said “Whenever I see my byline, it’s exciting.” I don’t really find that that exciting anymore. It hasn’t even been a year, so maybe that’s an issue.