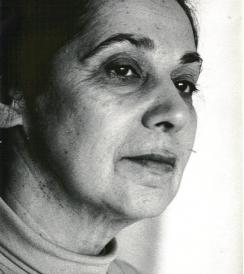 Norma Farber, children’s book author, poet, and accomplished singer, was born in Boston on August 6, 1909, and died on March 21, 1984. During those years, she published six books of poetry for adults and eighteen books for children, with many more children’s books published posthumously. She attended Girls’ Latin School, and she earned her Bachelor’s from Wellesley College in 1931 and her Master’s from Radcliffe College in 1932. She married Dr. Sidney Farber, founder of what became the Dana-Farber Cancer Institute, in 1928.

Farber began writing poetry while at Girls’ Latin School and began publishing her poetry in local newspapers and magazines, such as the Boston Globe, in the 1950s. Her first book of poetry for adults, The Hatch, was published by Scribner in 1955. Farber’s wrote in a variety of formats, including lyric poetry and sonnets.  Critics have praised Farber’s poetry for its energy, originality, and bold use of alliteration, drawing favorable comparisons to the work of Gerard Manley Hopkins.

Farber began writing for children in the late 1960s. Her first children’s book, Did You Know It Was the Narwhale? was published in 1967.  Of recurrent themes in her children’s books Farber wrote in a short autobiography:

It dawned on me a while ago that I have two obsessions (in my children’s books): the alphabet, and Noah’s Flood. … Alphabet poems and stories enchant me because these twenty-six letters are the warp and woof, the living texture of our spoken and written communication. I just can’t celebrate the English language loudly enough.

Her numerous alphabet books include As I Was Crossing Boston Common, which was awarded the Children’s Book Showcase Award and was a finalist for the National Book Award in 1976, I Found Them in the Yellow Pages, and This is the Ambulance Leaving the Zoo. Each features the alphabet in different ways – a turtle describes the exotic animals he sees being paraded through the Boston Common, each beginning with a letter of the alphabet, in the first, while the second, appropriately printed on yellow paper, lists various services and business found under each letter of the alphabet, with illustrations for each making the yellow pages’ entry come to life. This is the Ambulance Leaving the Zoo is written as a series of events and places, in rhyme, creating a fun nonsense story. At the end, though, the story is repeated in reverse, with each letter of the alphabet getting a line.

As for her second “obsession,” Farber soon branched out from writing solely about Noah’s Flood in Did You Know it Was the Narwhale?, Where’s Gomer?, and How the Left-behind Beasts Build Ararat, to include the story of Jonah and the Whale and the birth of Jesus in her collection of published works.

Other children’s books by Farber include There Goes Feathertop!, a retelling of “Feathertop” by Nathanial Hawthorne. She wrote nonsense stories, such as There Once Was a Woman Who Married a Man, which tells the tale of a woman’s varied attempts to coax her silent husband into speaking, and children’s poetry, such as Never Say Ugh! to a Bug.  Six Impossible Things Before Breakfast (1977), inspired by a quote from Through the Looking Glass by Lewis Carroll, is a collection of four poems and two short stories, with drawings by six different illustrators, including Tomie De Paola.  Farber was also noted for her collaborations with illustrators Marc Brown (I Found Them in the Yellow Pages) and Arnold Lobel (As I Was Crossing Boston Common).

Norma Farber was a prolific writer, with a zest for the fun and absurd, and a deep appreciation for literature that comes through in all of her writings.  Summing up her willingness to take on unfamiliar subjects, Farber wrote in an autobiographical sketch, “I should admit that I can be tempted, even in my seventies, to undertake new and difficult assignments. I welcome a challenge, a dare! Love to try something I’ve never tried before, especially if it seems to be way beyond me.”

Biblical Stories:
A Ship in a Storm On the Way to Tarshish. New York: Greenwillow, 1977.
Children’s Library
PZ8.3.F224 Sh