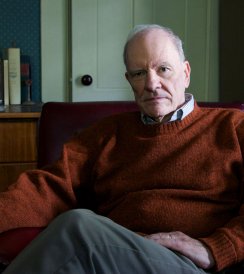 Philip McFarland was born in 1930 in Birmingham, Alabama, to Thomas Alfred, a lawyer, and Lucile Sylvester McFarland.  He remembers himself as a shy young man who came to love his history and English classes above all others.  The idea that he might someday go on to be a writer dawned around the age of fourteen, after classmates had sought him out for advice on improving their school themes.  When he was halfway through high school, a neighbor in Birmingham mentioned that Exeter Academy in New Hampshire was looking outside New England for talented students.  The family got in touch with the school, and its director of admissions stopped by on his next trip south.  Before long, the fourteen-year-old scholarship boy found himself among rock walls and birch trees that he’d only read about in the poems of Robert Frost.  He felt a bit dazed by it all but could not have been happier.

McFarland went on from Exeter to Oberlin College.  He had seen the beautiful Ohio campus at his sister’s graduation and sensed that the nation’s first coeducational college would furnish a welcome change from Exeter’s all-male environment.  Partway through Oberlin, he spent three months hitchhiking around the country, by prearrangement sending weekly columns about his adventures back to the Cleveland Press.  One vivid memory lingers, of his being stranded for hours at a sweltering desert crossroads in California, trying in vain to hitch a ride.  Very few vehicles of any kind came by, and the few that did didn’t even slow down.  It was dusk when a lone car emerged over the distant horizon.  McFarland fell to his knees and clasped his hands fervently together.  “Two young men in their jaunty, top-down convertible were approaching.  They stopped a short distance beyond me and called back, ‘Your prayers have been answered!’  I rushed at them and scrambled into the back seat, immensely relieved.  Doris Day was on the radio singing, ‘It’s Magic.’  And it was magic, as in high luxury we took off at a great clip under the desert stars.  It was as blissful a moment out of my youth as I can remember.”

Graduating from college as a history major during the Korean War, McFarland did his obligatory military service in the Navy.  He was stationed on a destroyer for eighteen months before being transferred to a communications base in Morocco.  On concluding his service, he learned that Oberlin had set up a new postgraduate scholarship funded by an alumnus, the editor of the Kansas City Star. McFarland applied for and was awarded the grant, and thus was able to attend St. Catharine’s College, Cambridge University, where after two years he earned a second BA, this time in English literature.  Later, he journeyed back to California, to take advantage of an offer to put together a catalog for a friend’s uncle, an antique arms collector.  The catalog sufficiently impressed Houghton Mifflin Publishers in Boston that he was hired to edit literature anthologies back East for use in public high schools.  After six years as an editor, he went into teaching, at Concord Academy, initially to further a new career as a textbook author.  But McFarland discovered that he loved teaching English more than assembling the contents of textbooks.  He remained at Concord Academy for thirty happy years.

In 1960, McFarland had written a novel, A House Full of Women, published by Simon & Schuster, which the critic Granville Hicks adjudged in the Saturday Review to be one of the three best first novels of that year (the other two, according to Hicks, were John Knowles’ A Separate Peace and Harper Lee’s To Kill a Mockingbird). With the exception of Seasons of Fear (1984), a fictional rendering of an actual slave revolt in New York City in 1741, McFarland has spent the last three decades writing histories and biographies.  Having determined at the start to write of Washington Irving and his times, he mentioned that aspiration to a Beacon Hill friend, who promptly introduced him to the resources of the Boston Athenæum.  It proved to be as blissful a professional occurrence in adulthood as had been the top-down convertible ride in the California desert in his youth.  The Irving project resulted in Sojourners (1979), and his months at the Athenæum grew into a life membership.  Other books followed, each emerging from something encountered while writing the preceding one.  Sea Dangers (1985) tells the story of a mutiny in the U. S. Navy in 1842.  The Brave Bostonians (1995) is a narrative of the year before the outbreak of the American Revolution.  McFarland’s Hawthorne in Concord, published in 2004, led on to his next historical biography, Loves of Harriet Beecher Stowe (2007)—two stories of American authors who knew and respected each other but whose works, in McFarland’s view, could not have been more different.

McFarland jokes that whenever he and his wife ponder leaving Lexington, after forty-two years of living there, they end up rejecting alternatives with the continued refrain: “No, no, too far from the Athenæum.”  He credits “the Boston Athenæum’s collections, its wonderful Interlibrary Loan services, and its knowledgeable, ever helpful, ever agreeable staff with making his particular kind of writing not only possible but immensely pleasurable.”  He has lectured at the Boston Athenæum and can frequently be found at one of the fifth-floor reading tables.  Some time ago, he was in the library consulting Bernard De Voto’s Mark Twain in Eruption when he came upon Sam Clemens’s outspoken opinion that Theodore Roosevelt was by far the worst president the country has ever had.  Why would Mark Twain think that?  Answering the question led to four or five years of research and writing; and if you’re curious about what the research revealed of Clemens’s reasoning, check out Mark Twain and the Colonel, available on our shelves in July and come to the lecture on July 19, 2012 – 12:00pm – 1:00pm.