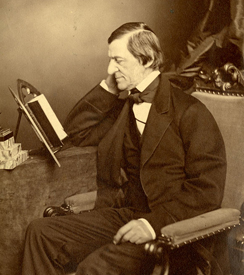 Ralph Waldo Emerson (1803-1882) was born in Boston to parents William and Ruth Emerson.  Emerson’s name was derived from both sides of the family: Ralph was the name of Ruth’s brother, and Waldo was the maiden name of his great-great grandmother Rebecca.    William Emerson was a Unitarian Minister who preached at the First Church in the Back Bay neighborhood of Boston.  William was also a founder of the Boston Athenæum, and one of its first trustees.

In May of 1811, just months after his eighth child was born, William passed away.  William was buried at King’s Chapel in the Cotton Tomb, named for John Cotton, a pastor of the First Church.  “Both men would live on in the descendants of William’s son, Ralph Waldo, and his wife Lidian Jackson, whose mother, Lucy Cotton, was a direct descendant of John Cotton.”  Shortly after, Ruth Emerson sold William’s library to the Athenæum.  Left alone to raise the family, Ruth worked as a maid and often took in borders.

Emerson grew up very close to his mother and siblings.  He also developed a close relationship with his Aunt Mary Moody, his father’s sister; she “was the dominant influence of Emerson’s childhood and youth.”  Aunt Mary had an unbounded interest in theology, and it was she who taught Emerson (or Waldo, as he preferred to be called) “many of the aphorisms he in turn taught his own children,” such as the famous: “Always do what you are afraid to do.”

Emerson was educated at Boston Public Latin School, and then went on to attend Harvard College, passing the entrance exam at the young age of fourteen (although, his father William beat him by a year).  Emerson was thirtieth in his class, and was named Class Poet.  Upon graduation, he decided to delay his entrance to divinity school and taught for a few years at his brother William’s “school for young ladies.”  After about a year, Emerson realized he was “a hopeless school master.”  Perhaps it was that Emerson longed for a different environment.

All his life, “Emerson…found himself pulled repeatedly…into the world of Nature.”  And it was Aunt Mary who “coaxed Emerson into giving Nature’s bounty a try.”  Emerson was not as charmed by nature as his aunt had perhaps hoped, but when his family moved to a wooded area of Roxbury in May of 1823, Emerson was close enough to the school so that he could walk there.  After a few months of trekking through the woods back and forth to school, he quietly changed his ways.  The following month, in a letter to John Boynton Hill, Emerson wrote that “Nature makes a man love his eyes.”

In 1825, Emerson had made enough money teaching so that he could attend Divinity School at Harvard.  In 1826, Emerson was sanctioned as a Unitarian Minister, and three years later he was ordained as a junior pastor with the Second Church in Boston.  Also that year, in September, he married Ellen Louisa Tucker.  Their marriage was brief, as Ellen passed away less than two years later.  The following year, Emerson resigned from the Second Church and toured Europe.  A month after he returned home, in November of 1833, Emerson delivered his first lecture, “The Uses of Natural History” at the Masonic Temple in Boston.  The following year, in 1834, Emerson met his future wife, Lidian Jackson.  After hearing a sermon he gave at the Twelfth Congregational Church, she remarked “’[t]hat man is certainly my predestined husband.’”  The new couple married shortly after and settled down in Concord, in a home they decided to name “Bush” where they lived for the next 47 years.  In 1836, Emerson published his essay Nature and helped to form the Transcendental club, which later published the journal The Dial.  Emerson continued to lecture and write essays and poetry for the rest of his life, including Self-Reliance in 1841.

An avid writer, he was also an avid reader (perhaps too much so at some points) and was a lifetime subscriber to the Athenæum: “Ralph Waldo Emerson (serious and dignified) came from Concord every week; he would become absorbed in reading for hours, and then wander about the library asking if anyone had seen his daughter Ellen.”  In regards to the types of books that he read, the “record of books drawn by Emerson is unusually large and heterogeneous.”  He was known to take out authors such as Moore, Dryden, Holmes, Goethe, and George Eliot.

Although, there were some people who knew Emerson that did not know many details about him.  When Emerson was nearing the end of his life, a reporter came in to the Athenæum to ask questions about him: what he read, what he wore, questions such as that.  Not knowing the gentleman was a reporter, the library attendant answered that “she did not notice his clothes, as she never got beyond his head, which always fascinated her, being bald in some spots.”

Emerson died on April 27, 1882 in his home due to pneumonia, and was buried at the Sleepy Hollow Cemetery in Concord.  He rests now amongst other literary giants like Louisa May Alcott, Nathaniel Hawthorne, and Henry David Thoreau.

Wendell, B. (1907).  The Athenaeum Centenary: The Influence and History of the Boston Athenaeum from 1807 to 1907 with a Records of its Officers and Benefactors and a Complete List of Proprietors.  Boston, MA: The Boston Athenæum.