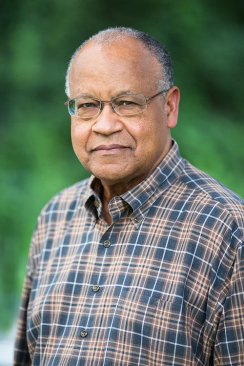 Ray Anthony Shepard’s first book, Now or Never! 54th Massachusetts Infantry’s War to End Slavery, was published in October 2017. Shepard describes the book as “the story of two black Civil War soldiers whose battlefield dispatches documented the regiment’s battle against Northern white racial arrogance as they fought the Confederacy’s attempt to establish an independent slave empire. George E. Stephens and James Henry Gooding answered Frederick Douglass’s call: ‘through Massachusetts we can get our hands on treason and slavery.’”

Dressed in the uniform that the soldiers of the 54th would have worn, Shepard delivered a dynamic presentation on Now or Never! to a rapt Athenæum audience in November 2017. Afterward, Shepard answered my questions about the book, its impact and reception, and his inspiration and research process.

RAY ANTHONY SHEPARD: I was born in Missouri, a state that benchmarked the path to Civil War, in a family whose grandparents and great-grandparents were enslaved. I grew up on the flat Nebraska prairie, the state from which Stephen Douglas notched another benchmark toward bloody disunion. I attended a junior high school named after the abolitionist poet John Greenleaf Whittier and graduated from high school in a town reluctantly named after the slain president. It’s not surprising that after years of teaching American history and developing history textbooks at Houghton Mifflin, I have launched an encore career writing stories about the lives of little-known but extraordinary African Americans who tipped the scales toward justice and equality.

Q: Why did you write this book?

RAS: I wanted to find a way to tell the story of how difficult it was for the country to free itself from human slavery and the economic gains of enslaved labor. When I worked at Houghton Mifflin, then located a few doors from the Athenæum, I passed the Shaw Memorial twice a day. Often I would stop to admire the artist’s realistic portrayal of the soldiers’ facial features and how Saint Gaudens showed these free men of the North’s unwavering courage and pride as they offered to sacrifice themselves to liberate enslaved African Americans. It urged me to retell their story.

Q: When you first conceived of the project, did you know you would focus on Gooding and Stephens?

RAS: I wanted to tell the story of the 54th through firsthand accounts. When I started I knew of Robert Gould Shaw’s personal letters and James Henry Gooding’s letters published in the New Bedford Mercury. A few months into the project I became aware of George E. Stephens through Boston-based scholar Donald A. Yacovone’s research and transcriptions of Stephens’s letters. With nearly 100 wartime dispatches from Stephens and Gooding I was able to tell the story of the “glory” regiment from the viewpoint of two African American soldiers. It was something that had not been done before and I felt it was worth doing.

Q: What did your research process involve?

RAS: Tons of reading primary and secondary sources, and of course being a member of the Boston Athenæum I always had a wonderful spot to read and think. Site research, however, is as valuable as archival sleuthing. To help me better describe the scenes in the book, I visited every place I wrote about. If the reader is able to see and smell what James Henry Gooding felt when he entered the Confederate hellhole of Andersonville, it is because I walked through the gate of that barren prison and imagined the open latrines used by 13,000 prisoners. I imagined the filth, disease, and depression that overwhelmed Gooding. In my writing, I tried to share that experience as if the reader, too, were entering a death camp.

Q: Was there information that was particularly challenging to find, or notably absent?

RAS: George E. Stephens wrote about the importance of the stories his father shared about life in Virginia at the time of the Nat Turner Revolt. But young Stephens didn’t write any of the details of those stories. I wish he had. Whatever they were, they led him to become determined and articulate, a brave soldier and writer who risked enslavement and death to help liberate 4,000,000 from America’s slave camps.

Q: Did your experience in educational publishing inform your approach to writing this book?

RAS: I have had the honor and good fortune of being a teacher, a schoolbook editor, and a teacher trainer. I am now even more blessed to publish a book about slavery, race, and emancipation. To show that the end of slavery was not a generous act of the North, but an unintended consequence of the Civil War—a war that took the lives of 315,000 Confederate soldiers, most of whom never owned a slave; of 435,000 white Union soldiers, few of whom thought slaves were worth the sacrifice; and the lives of 65,000 black Union soldiers who fought in the last two years of the war and who barely registered in our memory. It took 800,000 lives to end slavery, but it wasn’t enough blood to wash away the underlying cause—a racial hierarchy built on the soft bed of racial arrogance.

Q: Why did you decide to write this book for a young audience?

RAS: My first goal was to tell a good story, one that engages readers from 12 to 80. Underneath that effort lies my effort to show readers the critical role that free and literate African Americans played in the Civil War—saving the Union from slavery. (75 percent of military-aged Northern black men served in the Union Army.) It’s a story missing from school history curricula and one that leaves a knowledge gap in most adults’ understanding of our country’s history.

Q: What do you hope readers will take away from reading Now or Never!?

RAS: That the purpose of the Emancipation Proclamation was to fill depleted Union ranks by enlisting free African Americans to help liberate slaves who Abraham Lincoln had declared free. The success of the 54th encouraged the enlistment of 180,000 black soldiers and gave the Union a manpower advantage over the Confederates, who had more African Americans, but dared not arm them to defend their own enslavement. Yet even though the Union needed these men, there were restrictions: the regiments would be comprised of blacks but led by white officers. The War Department promised equal pay; however, after the regiment left Boston for Confederate battlefields the government reneged on its promise and ruled that African Americans were to be classified as manual laborers and paid half the rate of white soldiers. In protest, the soldiers and officers of the 54th refused all pay and fought and died for 18 months without pay. The stance of the Massachusetts 54th and 55th pressured Abraham Lincoln’s administration to restore equal pay. It was a heroic sacrifice greater than their charge on Fort Wagner.

Q: The book has received some stellar recognition, including starred reviews from Kirkus and School Library Connection and a place on Kirkus and the New York Public Library’s “Best Books for Teens 2017” lists. What’s been the most gratifying response you’ve received since the book’s publication?

RAS: It’s not often that someone my age, closer to 80 than 70, succeeds in launching an encore career. I’m grateful for the support I received from my wife, especially.

Q: What are you working on next?

RAS: I’m in the beginning research stage for a group biography of the African Americans who attacked Harper’s Ferry in 1859.