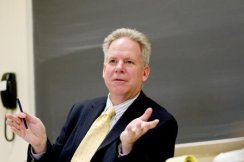 Robert J. Allison says there are worse things to be considered than a Boston historian. Originally moving for college and for Boston’s favorable gender imbalance, he has spent over three decades here. Since obtaining his doctorate from Harvard in the history of American civilization in 1992 and while teaching college courses on the subject, Allison has written or edited several books about Boston and Massachusetts, as well as eighteenth-century American history. He is the president of the South Boston Historical Society, vice president of the Colonial Society of Massachusetts, a fellow of the Massachusetts Historical Society, and a member since 1993 of the Athenæum. About Boston he says, “The city is a fascinating place.”

His almost 90 year old mother, however, still somewhat holds his vocation against him. In the acknowledgements of The American Revolution: A Concise History and The American Revolution: A Very Short Introduction, Allison writes that his mother “who hates history” took him to Morristown where a “quick glimpse of a white wig and a Continental uniform” inspired his drive for historical research. He explained that while the trip was purely for his entertainment, his mother did not hate history so much as she hated the way it was taught. “I think it really is a case of a time when you were supposed to memorize dates and memorize names,” he said.

Allison’s career path took a detour when he dropped out of college in the 1970s after his older brother died. He had gone to University of Wisconsin-Madison to study history and get away from his parents, but started questioning the practicality of his major. He was working as a dishwasher and thought, “I can keep working as a dishwasher and get a degree in history and then probably still [be a dishwasher], or I could become a cook and not get a degree.” So he became a cook, working in hotels in New England and Florida before ending up in Phoenix. Summers are slow for Phoenix’s hotel business so he spent time in used book stores, looking for anything interesting. Allison found Bernard Bailyn’s Pamphlets of the American Revolution and his Ideological Origins of the American Revolution, and called the latter a “revolutionary” book for him. In his acknowledgements in The Crescent Obscured, he credits Bailyn and his book for setting him back on track: “From a second-hand copy of Ideological Origins of the American Revolution I learned that ideas matter, that what people think makes a difference, and I decided to finish college. On the day I bought that book, I became a student of history.” Allison later worked with Bailyn as a graduate assistant, which he considered “really a lesson in how you go about writing and how you go about researching.”

Years of cooking did not directly benefit Allison’s writing except for being able to multitask and “reduce, reduce, reduce” something to a purer form: “You can do the same thing, perhaps, by putting more stuff in, but it is stronger if you get the flavor by taking out what is unnecessary.” Allison—whose titles often contain “concise,” “short,” and “very short”—never really enjoyed writing but enjoyed the challenge of putting something into as few words as possible. “People are busy,” he said. “People want to know the story, want to know what’s interesting about it.” He wrote in an email that he starts off with a question to answer and then spends time researching to “find out the stories, the people.” After writing it all down, it’s “rewrite and rewrite to put what you have written into a coherent form.” Allison is always aware that his work is not for his own enjoyment: “One also has to remember that someone is going to eat whatever you are dishing out. In writing or teaching, you do have to be conscious of your audience.”

Allison has taught at Suffolk University since 1992, where he is now the chair of history. He also teaches at Harvard Extension School and has created two online courses on colonial American history and the U.S. Constitution. At the Extension School, he won the Petra T. Shattuck Excellence in Teaching Award in 1997. Suffolk awarded him the Outstanding Faculty Award in 2007 and 2010 and its Student Government Association honored him with their Distinguished Faculty Award in 2006. Though he considers it misleading to “make the past into the present,” Allison tries to make students understand how issues in the 1770s are valid today: “There isn’t anything more important than understanding how government is structured and how we organize government because it has so many implications for us.”

Allison understands the particular interest people have in the city where they live. His favorite thing about teaching in Boston is taking students to sites and telling them what happened. In his acknowledgments for Short History of Boston, he wrote about the interest even of his two sons: “I can only hope this book will help them better understand their hometown.” He also said his mother in New Jersey, who does not have colonial American ancestry, enjoys her “least favorite subject” when there’s a good story, like hymnal wadding at the Battle of Springfield:  “It’s something you learn to cherish in the place where you are, the stories of where you are.”

Allison’s Athenæum affiliation began after he tagged along on a special tour for Suffolk’s History Society given by retired English professor and Athenæum member Stanley M. Vogel. He enjoys the friendliness (“much friendlier than any other library”) and the quiet to do work: “It’s a great place to spend time with the great minds.” Allison credits the Athenæum, and especially Curator of Prints & Photographs Catharina Slautterback, in his books and says it’s a great place to look at pictures as well as research. “And it’s because you come here to the Boston Athenæum and you can really find such great images that are unexpected,” he said. He also said the “best comments” in his Short History of Boston and Short History of Cape Cod were about images that were nowhere else. But it isn’t all just research. Allison enjoys both classic and contemporary novels for fun and has read Trollope, Thackeray, and Richard Russo. He is also currently enjoying Decline and Fall of the Roman Empire. Of the many books he’s consumed at the Athenæum, he says: “I wouldn’t venture to guess a percentage, but it’s probably more fun than research.”