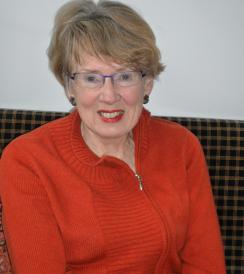 Ruth Butler was born in Buffalo, N.Y. Her mother, Hermine Hansen, was descended from three generations of teachers, while her father, George Butler, looked back to a great grandfather who was a leading architect in Ireland. Something of this heritage mix worked for her. Her mother signed her up for art lessons on Saturdays when she was five. Butler remembers painting moody village scenes with dark, brooding skies—sometimes inhabited by witches. It was only recently when she saw the Charles Burchfield show at the Whitney that she learned that in this period of her life, Burchfield lived some thirty miles away from her family’s town. She wonders if she did not see illustrations of his work in the local press and that it was he who inspired all that darkness.

By the time she was ready for college, her family had moved to Illinois, and she chose the combination of Western Reserve University and the Cleveland Institute of Art as good spots for furthering her education. In the end it was not the schools, but the Cleveland Museum of Art, where she had a part-time job, that held the most sway in determining the next step. She wanted to be an art historian, and this led to the Institute of Fine Arts in New York. After a year of being a Medievalist—which did not work—by chance she took a summer course with H.W. Janson, who himself had just switched his focus from Renaissance sculpture to 19th century sculpture, a field that interested very few people in the 1950s. But for her, it was the right match.

In 1957 Butler won a Fulbright and headed for Paris to begin research on a PhD dissertation on the early work of Rodin and its relationship to that of the previous generation of sculptors. She remembers Paris as being a rather dreary post-war city and the Musée Rodin as one of the least visited, ill-kept museums in the city. She also spent some hours as the only person, save the guards, in the Grande Galerie of the Louvre, which was unheated during winter months.  It was an astonishing period, but she also feels it was a difficult one. Among the difficulties for Butler was the fact that the archives of the Musée Rodin were closed. Many years later she would learn what a rich resource that archive is and make use of it.

A year after she returned from France she got her first teaching position at Boston University where she taught four courses including a graduate course in Medieval Art. “I did nothing but eat, sleep, prepare lectures and give lectures,” is the way she remembers that experience. Her next “real” job was at University of Maryland, College Park, and while there she finally began to make something out of the work she did for her PhD. The J.B. Speed Museum in Louisville Ky. invited her to mount an exhibition of French sculpture. She then put together Nineteenth Century French Sculpture: Monuments for the Middle Class. It was still not a fashionable subject. It even surprised French scholars.  Sometimes they addressed her as “Mme. Louisville.”

Following the Louisville show and catalogue, New York Graphics commissioned her to write a general book on sculpture. Western Sculpture: Definitions of Man came out in 1975. As she explains the title is a quote from Joseph Beuys, who in 1969 said: “Man hasn’t thought much until now about sculpture. The fact that sculpture is a complex creation has been neglected. What interests me is the fact that sculpture supplies a definition of man.” But that was in the small print that few people read and a few years later the title was much criticized by feminists.

In the period when Butler was working on Western Sculpture, she read a very interesting article in The New York Times about a new public and experimental (no classes larger than 20)  university designed to serve inner-city students in Boston. She remembered how much she had enjoyed living in Boston and she liked the description of such a university. So she applied for a job which brought her back to Boston to teach at U Mass/Boston for twenty years, serving as Chair of the Art Department for seven years.

From 1980 on Butler’s writing focused on Rodin. Rodin in Perspective was published by Prentice-Hall in 1980. Next she was one of a team of curators that mounted Rodin Rediscovered at the National Gallery in Washington in 1981. When the archives in Paris were finally open and available, she turned her attention to a biography of Rodin. Rodin: the Shape of Genius was published by Yale University Press in 1993.

By this time, Butler was such a familiar face at the Musée Rodin that they invited her to serve on the Museum’s Conseil d’Administration giving her the opportunity for even more frequent visits to the Musée Rodin. This led to her most recent book:  Hidden in the Shadow of the Master:  The Model-Wives of Cézanne, Monet & Rodin. On one of her many walks through the museum she noticed a label which was not correct.  It accompanied an early Rodin painting indicating that it was a portrait of the artist’s mother. Actually it was a painting of Rose Beuret, Rodin’s wife. Butler mentioned this to a member of the staff.  Some years went by, but the label did not change. This got Butler thinking in broader terms about the important role played by artists’ wives, especially among the artists of the Impressionist generation. These thoughts ultimately became Hidden in the Shadow of the Master.

Given the growing discomforts of overseas travel (her first travels to France were by ship), Butler feels at present that Rodin and French sculpture are in her past. She now has developed a keen interest in nineteenth-century bronze sculpture in the Boston area. She has no idea where this will lead.  Butler re-joined the Boston Athenæum a few years ago as part of her desire to develop her understanding of local bronze sculpture. In the past, when she was working on her Rodin biography, she had spent many an afternoon thinking and writing in the fifth floor reading room. “It’s such a wonderful place to work; it’s a place where a person feels totally connected to the beginnings of culture in America. One just cannot get over that.”

Hidden in the Shadow of the Master: The model-wives of Cézanne, Monet, and Rodin

Rodin: The shape of genius