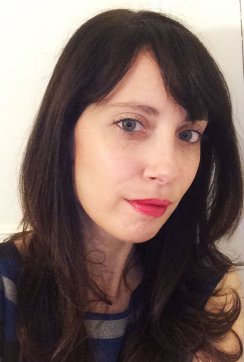 I first met Sara back in 2009 when she was a BU graduate student researching here at the Athenæum. Since then it has been a pleasure following her career and talking with her about all sorts of subjects. Her book, Household Gods: The Religious Lives of the Adams Family, published by Oxford, was recently published and I wanted to ask her a few questions about this interesting project. Be sure to pick up her book and follow her on Twitter: @sarageorgini.

Q: Where were you born and raised?

Q: Ah, a fellow New Yorker—no wonder we get along!  What is your educational background?

SG: As an undergraduate, I studied print journalism at Boston University. It was a pleasure to return there and earn my doctorate in history.

Q: What is your day job?

SG: My Massachusetts Historical Society career began a decade ago in the Library, and I jumped at the chance to join the Adams Papers editorial project staff. I am series editor for The Papers of John Adams. As a public historian, I’m passionate about ensuring preservation of and access to primary sources like the Adams Papers. I also write about #vastearlyAmerica for Smithsonian.

Q: So we missed the chance to work together at MHS by a couple of years. How did you find the Athenæum?

SG: I found it via a mix of friends, (very) old and new! The nineteenth-century Adamses’ letters and diaries record many borrowing trips to the Athenæum stacks, as well as happy hours spent lingering over their finds. I wanted to recapture some of that exploratory spirit as I tracked their reading habits for Household Gods. In turn, that led me to conduct historical research at the Athenæum and to attend some excellent public programs. Through the good grace of several present-day friends and colleagues, I found a way to voice my support by becoming a member.

Q: What is it about the Athenæum that appeals to you?

SG: It is truly a scholar’s retreat, nestled in the city center. Plush seats, sweeping views, richly lined bookshelves: every floor combines to inspire the historian’s craft. Beyond the wealth of research resources, though, I think the institution’s greatest prize lies in its gracious and knowledgeable staff. When you walk into a private library, especially one loaded with rare books and fine art, you’re never sure how friendly or clubby it will be. The Athenæum staff are the heart and soul of this place. Take any busy Saturday. I see them welcome history fans, scholars, and Freedom Trail visitors of all ages and stages—and I’m deeply grateful to belong to a community like that.

Q: What were the struggles of working on Household Gods: The Religious Lives of the Adams Family?

SG: Writing Household Gods, which explores the Adams family’s religious history from the Puritans to the Progressives, meant keeping up a breakneck pace with three centuries of American history and culture as it happened. I worked hard to give each generation its due, showing how the family used ideas of faith and doubt to make decisions great and small. One of the major struggles lay in producing a tight narrative, while pausing to interpret different religious practices and beliefs as the Adamses encountered them. I aimed for a lively blend of biography and intellectual history, a story that captured their ideas in action. Trying to sit beside people from the past and chart all the places their minds turned—during a pivotal era in history—was a battle on the page. So I began every chapter with an Adams on the road, which mirrored my choose-your-own-adventure approach to research. Leaping into such a generous landscape turned out to be a real blessing. You can start reading the book anywhere, and you’ll be on the main path.

SG: Like the Adamses, I love to write and travel. I tried to walk through the same liturgical worlds they did by exploring churches in Massachusetts, New York, Washington D.C., London, and Paris. Matching up what they wrote with the sensory impact of a worship space was an amazing gift. One of the best trips I took was to All Hallows Barking parish near the Tower of London, where Louisa Catherine Johnson married John Quincy Adams. Blinking up, I could map reference points from my research onto every pew, window, and wall. Below in the crypt lay Archbishop William Laud, who triggered the Puritan Adamses’ flight to America. Ahead was the altar that Charles Francis Adams wept at in the 1860s, reflecting on his parents’ wedding day. Just beyond the pulpit, the Tower’s long shadow thickened and twisted. Here was the corner of the seventh-century church smashed in the Blitz, heralding a world war prophesied by Charles’s son Brooks. Learning how to overlay what I read with the place I saw: that was a joyful lesson.

SG: It’s often said that we tell old stories to get new ones. Going in to Household Gods, I thought that the big turning points we use to study and teach this period would show up as big moments in the religious lives of the Adamses. Instead, I learned that when it comes to American religion, local history can be epic. It’s a small-town scandal, not a star revivalist, that turns John Adams’s steps away from a life in the pulpit. I pivoted, rejiggering my timeline and sources, because the family saga suddenly arced in so many unique ways. It was an excellent reminder that reading sources is the hardest thing we do. The act of writing history is always a risk, and, yes, a rush.

Q: In your opinion, what makes the Adamses relevant to today? And what about them do you find compelling?

SG: They were lifelong students of government. They were fierce cultural critics who thought and wrote freely about what American citizenship should be. From generation to generation, the Adamses constantly ripped up and rebuilt themselves, trying to reconcile private sentiments with public service. Drawing on ideals of Christian citizenship, they managed a major political brand. All of that came at a great cost. We might look at them and think about questions swirling today: how do you balance party politics and celebrity? What is the role of religion in a democracy?

For more than a century, the Adamses lived at the heart of political power. They struggled with the fame and the focus that came with that role. The family left us an honest and unabashed chronicle of what it felt like to start a revolution, to lead a republic, and to endure a civil war.

Q: Do you have a favorite Adams? I always had a soft spot for Charles (the apple of Abigail’s eye).

SG: Well, here is a question to shipwreck on, as it changes from week to week and letter to letter. Right now, I’m intrigued by how Abigail Adams evolved her political thought. Long before women won the right to vote, Abigail learned to navigate the republic’s party rifts and found a way to write herself into the national saga. As a public figure, Abigail Adams remade the role of First Lady in provocative and productive ways. She was a revolutionary in her own right. She acted as John Adams’s one-woman cabinet. She cultivated a deep, diverse pool of correspondents, including luminaries like Mercy Otis Warren, Thomas Jefferson, and Benjamin Rush. Her prose is brisk and firm. Yet she can throw her perspective gloriously wide, summing up world events with newsy charm. When you meet Abigail Adams in the archive, you’ll think: “Tell me more.”

Q: What is your writing process? How long did it take you to research this book?

SG: It’s been a ten-year adventure. I worked full time at the Adams Papers while earning my Ph.D. at BU. Household Gods was the dissertation that I honed during many desk lunches, late nights, and too-early mornings. I learned about research, writing, and project management from my fellow editors and hard-working colleagues at the Historical Society. Joining a #BookSquad crew of area historians who were also facing major deadlines certainly boosted both my accountability and my pace. As for process, I’m happy to write anywhere and everywhere. I like to edit in the mornings, when I’m a little less caffeinated and a lot more ruthless with the text. Generally, I save new writing for the evening, so that the day ends in creation.

Q: An editorial morning sounds amazing and I love the idea of ending the day in creation. Do you have a favorite book in fiction and/or non-fiction? Favorite author?

SG: The play’s the thing! Between research bouts, I dip in and out of reading drama in Spanish or French, to sharpen my foreign-language skills and to refine my narrative approach. We historians need to think about character development, plot lines, and which voices you hear first, last, or not at all, in a story. I weathered Corneille in the winter, but now that Boston’s spring gardens are unfurling their best, it’s time for a little Voltaire. I’m fascinated by early Americans who used dramatic culture to investigate social issues, and by the stories that a city sings to itself onstage. No spoilers, please: I just began reading Voltaire’s Zaïre, which British soldiers staged a version of at Faneuil Hall when they occupied Boston during the Revolutionary War. Good Athenæum readers, bring on your nonfiction recommendations! I’ve been savoring two science picks: Elena Passarello’s Animals Strike Curious Poses and Steve Brusatte’s Rise and Fall of the Dinosaurs.

Q: Any projects on the horizon you’re able to talk about here?

SG: Happily, plenty of new research questions bubbled up while writing Household Gods. I’m grateful to the kind folks I meet at book talks who tell me rich family histories of religion and cultural change. Here’s one topic that keeps tugging at me: Where did early Americans go to talk about power, and what did they say? I’ve been digging into the colorful and less-chronicled history of state constitutions, curious to learn more about how colonists became citizens. Since the nation’s founding, Americans have made nearly 150 state constitutions, and then changed them over 12,000 times by amendment. Such civic engagement! My research appraises the role of state constitutions in declaring rights, preserving liberties, and framing government for the revolutionaries who built the republic. Like many of his peers, John Adams was emphatic that, in his “political creed, the word liberty is not the thing; nor is resentment, revenge, and rage, a constitution, nor the means of obtaining one. Revolutions perhaps can never be effected without them.” The second president’s passion for good government mirrored that of a generation caught between independence and ideals. But what is the story of, say, Abigail’s Constitution?

Between 1776 and 1861, the age of revolutions blossomed into an age of constitutions, with people fighting to make change at the local level. They gathered in conventions—to debate constitutional legacies, to advocate for women’s rights, and to give voice to African-American citizenship—in powerful political displays that reshaped their relationships with local authority. State constitutional conventions, especially, served as roads to reform. I’m working on a new intellectual and cultural history, showing how American women and men evolved into modern constitutional thinkers. Spanning the era from the Declaration to disunion, I focus on how “we the people” made—and remade—state constitutions, often struggling to define liberty and law.