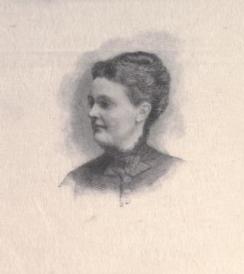 “Find your quiet center of life and write from that to the world.” – Sarah Orne Jewett

Sarah Orne Jewett was born in 1849, in South Berwick Maine, the small village that would be her artistic inspiration and her “true home” for the entirety of her life. Her father was a physician and would often take his young daughter along with him on visits to the homes of local farmers and fisherman. These early outings likely inspired Jewett’s profound love of the people of Maine and their way of life. She attended the Berwick Academy through 1865, though frequent illnesses kept her home and tutored by her father. Jewett would later say that she considered herself to be primarily self-educated through excessive reading, and this became a lifelong trend: she remained an enthusiastic consumer of the written word and a supporter of many of her artistic contemporaries, even as she found success with her own writing. Jewett published her first story, “Jenny Garrow’s Lovers” in 1868, when she was only nineteen years old. For that work and her other early stories she used the pen name “Alice Eliot” or “A. C. Eliot”. A decade later those stories and others would be published as Deephaven (1877), a collection depicting a fictional New England town modeled on South Berwick. She wrote three novels: A Country Doctor (1884), A Marsh Island (1885), and The Tory Lover (1901), as well as several books for children. Her greatest strength lay in her collections of short stories and vignettes, particularly The Country of Pointed Firs (1896), by far her most well-known work. As with much of her work, it focused on a fictional town in Maine. In her works, Jewett returned to the recurring theme of the changing landscape of those towns, where shipyards and wharves were closing, and where young people, particularly men, were beginning to leave the old villages.  She had a precise way of writing and a compact style that many of her contemporaries admired. In her obituary, the Boston Globe remarked on the strength that lay in “the detail of her work, in fine touches, in simplicity.” Despite spending most of her time in Maine, Jewett was a valued member of Boston’s flourishing literary circle and often stayed part of each year in the city. She was always welcome in the home of her dear friend Annie Fields, who lived in the heart of Beacon Hill. Authors like Oliver Wendall Holmes, Rudyard Kipling, Henry James, Harriet Beecher Stowe, Alfred Tennyson, Mark Twain, and Henry Wadsworth Longfellow were also guests at Mrs. Fields’ beautiful home at 148 Charles Street. It was another friendship, with Mrs. Cabot of Beacon Hill, which would connect Jewett to the Boston Athenæum. The two became close friends at the end of Mrs. Cabot’s life and Sarah often kept her company after the older woman became bed-ridden. Upon her death, Mrs. Cabot willed Sarah her membership to the Athenæum, an appropriate choice given their shared love of literature. Jewett’s lasting legacy also includes her influence on another “great” American author. In 1907, she first met Willa Cather, whom she befriended and mentored in a relationship with a deep and lasting impact. At the time, Cather was working as a journalist in New York City, something Jewett discouraged because she believed Cather needed to dedicate herself entirely to her work. When asked for an opinion on a piece of writing, Jewett responded at length, passing on advice gleaned from her own career: “You must write the human heart, the great consciousness that all humanity goes to make up. Otherwise what might be strength in a writer is only crudeness, and what might be insight is only observation; sentiment falls to sentimentality—you can write about life, but never write life itself.” She encouraged Cather to write what she knew, to write the life and experiences that had shaped her own world. In turn, Cather dedicated O Pioneers!, based upon memories of her childhood in Nebraska, to Jewett. In 1902 Jewett suffered an accident that damaged her spine and head. These injuries left her in poor health for the rest of her life, and sadly put an end to her writing. She retained her positive outlook and continued to spend time with her friends in Boston. In 1909, she passed away at her beloved house in Berwick, of which she had said years earlier: “I was born here and I hope to die here, leaving the lilac bushes still green and growing and all the chairs in their places.”