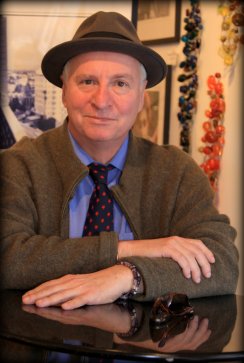 A longtime resident of Milton, he has been a member of the Athenæum for over 30 years. When we spoke in early October, he shared some BA memories, his fondness for typewriters (“I’ve got my father’s 1940 Corona, it’s like this tall, and, you know, ‘tap-tap-tap.’ My children think I’m insane.”), and also some of his experiences as a bestselling author, all with a good, ready dose of dry humor.

Q: Tell us about your background, where you were born and raised, etc. And how did you get into writing biographies?

A: Born and raised in New York City, went to a private academy in Philadelphia, had five years of Latin, and I came here, to Boston University, in 1965, and I’ve never left. I started my career writing. I was the editor of the BU News, which at the time was the largest student newspaper in the country—this was in 1967, ’68, ‘69. Couldn’t really go to class because we were going to demonstrations every day. I burned my draft card on the steps of the Arlington Street Church, 50 years ago, like, this month, November, October, with all my friends. Several thousand people burned our draft cards. Then when it was time to be drafted later on, I had to tell them that I didn’t have my draft card anymore.

But anyway, I graduated in 1969. I wrote the first story on the first front page of what was then called the Cambridge Phoenix, which then became the Boston Phoenix. I was the music editor of the Phoenix, a weekly paper in Boston. There were so many students. Each issue was 500 pages, in ten sections…they were amazing, and unwieldy. Then I became music editor of Rolling Stone, and then started writing for The Boston Globe, and The New York Times.

And then an editor at Doubleday saw an article I had written about Bob Marley, before anyone had heard of Bob Marley, and commissioned me and my photographer friend, Peter Simon, to go to Jamaica and write a book about reggae and the politics in Jamaica and the Rastafarians and ganja, all that stuff we kinda liked anyway—and that’s where my pathetic career begins. And this book was published 40 years ago this month, called Reggae Bloodlines, and this led to several other books about Jamaica. I worked with Bob Marley on his memoirs, and then he died and I finished them. And I left Rolling Stone and started working with rock bands.

I had this wonderful literary agent who said, ‘All of these rock bands are gonna have legends, and someone’s gonna have to be the guy who writes the legends.’ And so I started touring with Led Zepplin, Rolling Stones, and spent ten years doing that and working with all the big bands, Fleetwood Mac and Doors, and all that stuff. I’ve published 19 of these things so far…

You hear a lot of talk in my business that rock is dead. ‘Rock’n’roll will never die,’ but now these aren’t the same stories as the rock stories. Rock is like an ‘ism’, it’s like an artistic movement, like modernism or surrealism, and Rock-ism is kinda over. But on the other hand, it’s spawned the biggest audience of its kind in history. I mean, Zepplin sold 200,000,000 albums; Fleetwood Mac, over 100,000,000. There are religions on the planet that don’t have as many people as in the rock audience. So that’s why I’ve been so lucky, to be the guy telling these stories to this enormous planetary audience. My books get translated into Urdu, and Chinese piracies, Arabic, and Korean—Bob Marley just came out in Korean—and Hammer of the Gods is in 20 different languages…and some of the material in, like, the Bulgarian editions is stuff that I didn’t write, they just throw it in there to bring the story up to date. So I’ve been very lucky to have this audience. But I think we’re in the last years of this audience. I don’t think that many people want to read about Lady Gaga, Katy Perry, or whoever the bands are today. There have already been about ten books about U2. It’s amazing that Stevie Nicks is getting such great reviews. She’s still around, she’s 69 years old, and she’s going out on tour with Fleetwood Mac for the next two years. But these are the last days of this, so I’m gonna have to switch to, like, horticulture or some other topic. I’ll figure out stuff to do.

Q: How did you find your way to the Athenæum? What about it appeals to you?

I had a friend whose father was a proprietor, and when I was working on the Bob Marley material in the early ‘80s, he said, ‘You should go to the Boston Athenæum because they’ll have all this stuff on Jamaica that no one else has,’ and it’s true. This library has Long’s history of the island of Jamaica. You have to go to the rare book room. They have all this incredible stuff, you’d have to go to the British Library in King’s Cross in order to get as good early, early Jamaican stuff…so I joined the library. Back then it was two or three recommendations I had to get people to write, to prove I wasn’t a book thief. Which is a lie [laughs]. And it was amazing. This was in the days of Rodney Armstrong, several directors ago, and he didn’t believe that the library should be air conditioned or climate controlled—and you could ask Mr. Feeney about this, he remembers this—sometimes on hot summer days, a directive would go out, a memorandum, mimeographed, saying, ‘Everyone go home at three today because we don’t want anyone to die.’ And so if you were coming to return a book in July, the entire staff would be coming out of the library, staggering out, drenched in perspiration, literally streaming with sweat because the library was so hot!

I use the library all the time. It’s hard to park, though. I don’t take advantage of the book mailing because I like coming here so much, you know, because Milton is so boring. And to come up to Beacon Hill is a cool thing. The library has been, really, an important part of my career. As a guy who writes rock books, it hasn’t been all that germane, but the thing about my books is I try to bring in all the other stuff that is the background, like with Long’s history of Jamaica, to find out where it’s all coming from.

Also, the serials and periodicals are really important, because Tom can lay his hands on all sorts of esoteric stuff, from way back…unfortunately he won’t let me take them home [laughs]. It’s okay, it’s a library, I’ve become used to this.

Q: What about your newest book?

My new book is called Gold Dust Woman, a biography of the singer Stevie Nicks from Fleetwood Mac. It covers the period from her birth in 1948 to 2017.

It’s gotten rave reviews in the trades…it got a star in Publisher’s Weekly…which is a good thing, and a very good review in Kirkus, and now we’re waiting for Library Journal, if it still exists [ha]. It’s the big three. If you do very well in those, odds are that the librarians—how many thousands of towns out there in this country and how many thousands of librarians?—so of my 19 books, I think five have been NYT bestsellers. You can tell pretty early on because when the orders start coming in from the libraries in Kansas, Montana, whatever, there’s hundreds of them. That’s the way they do the bestsellers list, they look at libraries, they look at Amazon, the independent bookstores, all that.

I have this ritual when I’m in New York, where I go to the St. Patrick’s Cathedral, St. Andrew’s Chapel, and I throw in like 50 bucks in the little thing, and I light about ten candles and I go, ‘Please, please, one more bestseller!’

All readers are writers, even if you don’t write. I will say to the younger writers—it’s the old Robert Graves joke—that the only thing that an old writer can do for a young writer is die. You can’t teach this stuff, you either have it or you don’t, so I’m prepared to die. As soon as someone wants to come up and do what I do, I’m gonna retire.