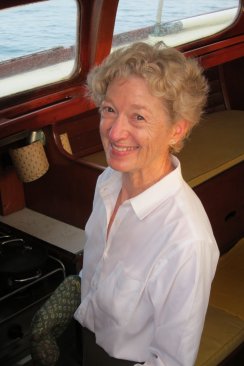 New York Stock Exchange. Groundfishing in New England waters. Sculpture. Contract interior design. Arbitrage. Cranberries. When I think of my conversation with Susan Playfair, what strikes me is just how eclectic is her curriculum vitae. Cranberries, she writes in her newest book, America’s Founding Fruit: The Cranberry in a New Environment, “can be boiled in sauces, baked in a pie, frozen in sorbet, dried in cereal or salads, pulverized in capsules, even served smoked.” I will have to fight the urge to metaphorize Susan’s professional versatility into a tart red berry. The facts are more compelling anyway.

America’s Founding Fruit: The Cranberry in a New Environment2008–2014

Attended Bard expecting to study writing under Ralph Ellison. Due to scheduling conflicts, however, Ellison turned out not to be available, so she left the writing major and took up sculpture, graduating with a degree in fine arts.

Insuppressible curiosity that stretches in many directions; moxie; design savvy; total commitment to a project; focus; enthusiastic conversationalist and professional communicator; writing that is descriptive and delectable, like this, from her latest: “The temperature is seventy-three degrees. Morning clouds have disappeared to allow the sun to highlight a wash of red berries on indigo blue water.”

To live well is to learn everything you can. To stay mindful, curious, and focused on a task until the job is done. Susan Playfair lives well. I have my inspiration.ReferencesPlayfair, Susan.Vanishing Species: Saving The Fish, Sacrificing The Fisherman. Hanover: University Press of New England, 2003.Playfair, Susan. America’s Founding Fruit: The Cranberry In A New Environment. Lebanon: University Press of New England, 2014.http://www.susanplayfair.com/