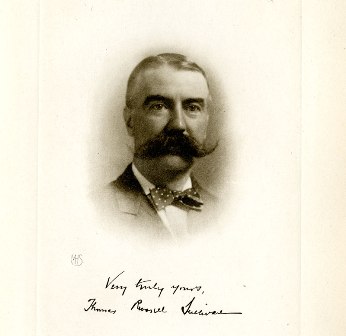 “One hurries through Pemberton Square, oppressed by the swollen bulk of the Court-House and its dependencies where the lawyers make skyward for light and air in rushing elevators, to come upon the Athenaeum crowded by domineering neighbors, that having despoiled it of dignity seem to be elbowing it away.” Thomas Russell Sullivan, Boston New and Old (1912)

Novelist and dramatist Thomas Russell Sullivan was born November 21, 1849 at Boston to the Thomas Russell and Charlotte Caldwell (Blake) Sullivan.  His great-grandfather James Sullivan had been Governor of Massachusetts and the first president of the Massachusetts Historical Society.  The elder Thomas Russell Sullivan had been a Unitarian minister in Keene, N.H., before moving to Boston and becoming a schoolmaster.  Sullivan attended Boston Latin School and aspired to go on to Harvard College.  Both of his parents died by the time he was fourteen, however, and Sullivan was forced to support himself rather than attend college.  He took on a series of office jobs, eventually becoming a bank teller.  As a clerk for the Bowles Brothers firm, Sullivan lived in Paris and London from 1870 to 1873, cultivating an appreciation for fine arts and especially the theatre.  With the failure of Bowles Brothers in 1873, Sullivan returned to Boston, working for Union Safe Deposit Vaults of Lee, Higginson & Company by day and writing original plays at his Charles Street residence by night.  By 1880 Sullivan’s plays, including both originals and adaptations of French comedies, were regularly staged at the Boston Museum, a Tremont Street venue which showcased natural history specimens as well as theatrical performances from 1846 to 1903.

In 1885 Sullivan published his first novel, Roses of Shadow, a sentimental romance which soon earned him local renown as a promising literary talent.  Soon after, Richard Mansfield, then among the most famous actors in America, befriended Sullivan and suggested he adapt Robert Louis Stevenson’s latest bestseller, The Strange Case of Dr. Jekyll and Mr. Hyde.  Mansfield would take on the dual title role himself.  Sullivan’s adaptation, titled Dr. Jekyll and Mr. Hyde, premiered at the Boston Museum on May 9, 1887.  The Boston reviews were favorable, and after some revisions the production traveled to New York in September and to London the following year.

The London production of Dr. Jekyll and Mr. Hyde will forever be associated with the series of unsolved murders attributed to Jack the Ripper.  The show opened just days before the first of five horrific murders in London’s Whitechapel district.  Just as more recent critics have blamed horror movies and video games for acts of violence, London tabloids immediately cited Mansfield’s portrayal of the depraved Mr. Hyde as a factor in the Ripper slayings.  Letters to newspapers on both sides of the Atlantic posited that Jack the Ripper was surely a real-life Jekyll and Hyde, a seemingly respectable member of society, perhaps a doctor, leading a double-life as a serial murderer.  At least one theatergoer became convinced that Mansfield himself was the killer, and tipped off the London police accordingly.  The publicity made Mansfield famous, but show attendance waned as many Londoners deemed the play to be in bad taste.  Mansfield soon closed the production and revived one of the romantic comedies on which he had built his career, returning to America not long after.  The actor was never seriously under suspicion by any official investigation.  Nevertheless, with Dr. Jekyll and Mr. Hyde looming so prominently in the Ripper mania of the London tabloids, it is perhaps inevitable that Mansfield is so often remembered in this dubious context.

Though the London production had proved a disappointment, Sullivan was sufficiently encouraged by the critical response in Boston to quit his day job.  Now regarded as Boston’s leading dramatist, Sullivan was at last able to earn a living as a writer.  He collaborated with Mansfield once more in 1891, writing Nero, in which Mansfield played the Roman emperor.  The play was a critical and financial failure and the ever volatile Mansfield had become impossible to work with.  Jekyll and Hyde would prove to be Sullivan’s only major theatrical success.  Though Sullivan’s career in the theatre had come to an end, he would remain a respected figure in Boston’s literary community on the basis of his novels and short stories.

Sullivan became a proprietor of Boston Athenaeum in 1889 and was elected to the board of trustees in 1909.  He also served as vice president of the Tavern Club from 1886 to 1908, and socialized at the club almost nightly.  In 1899 Sullivan married Lucy Wadsworth (1869-1947), daughter of the accomplished ophthalmologist Dr. Oliver Fairfield Wadsworth.  Sullivan had known Dr. Wadsworth since at least 1893, when he consulted the doctor after losing sight in his left eye.

Thomas Russell Sullivan died on June 28, 1916 at his home in Boston.  A eulogy written by Henry Cabot Lodge was published in the annual proceedings of the Massachusetts Historical Society shortly thereafter, Sullivan having joined the society just two months prior.  He was interred in the Sullivan family plot at Mount Auburn Cemtery, to be joined by Lucy upon her death in 1947.  The Sullivans had no children.

Thomas Russell Sullivan is, admittedly, an obscure and minor author.  His novels and stories are seldom read, and his sole theatrical triumph forever overshadowed by the stature of Robert Louis Stevenson, the original creator of Jekyll and Hyde.  Sullivan did, however, leave behind a legacy of perhaps greater significance than his literary endeavors. Portions of Sullivan’s diary were published in 1917 as Passages from the Journal of Thomas Russell Sullivan, providing historians with a trove of anecdotes and observations relevant to the study of Boston society in the 1890s.  Quotations from Sullivan’s journal appear with some regularity in the work of Walter Muir Whitehill and other historians seeking to evoke Sullivan’s time and place.  Sullivan’s manuscripts, personal papers, and letters are kept at the American Antiquarian Society, Harvard University, and the Boston Athenaeum.  Along with published diary excerpts and his final published work, Boston New and Old (1912), the written record of Sullivan’s life represents an important resource for understanding the theatre scene and literary life of Boston in the late nineteenth century.

Image courtesy of the Massachusetts Historical Society.  Collection of the Boston Athenaeum.