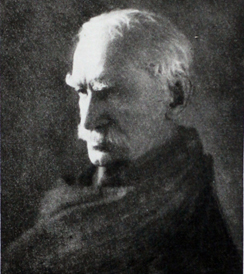 “O Time! whose verdicts mock our own/ The only righteous judge art thou/ That poor old exile, sad and lone/ Is Latium’s other Virgil now.”- Excerpt from “On a Bust of Dante”, Thomas William Parsons

Dentist, poet, and well-known translator of Dante, Thomas William Parsons, Jr. was born in Boston on August 8, 1819. He was the son of an English dentist of the same name, Dr. Thomas William Parsons. He grew up on nearby Winter Street and attended Trinity Parish and the Boston Latin School as a boy. While in school, he excelled in classical languages and made his first foray into classical translation with an attempt at Horace. However, Parsons dropped out just before he was done in 1834. Although his father had attended Harvard University for his M.D., the young Parsons opted not to study there at first, and in 1836, he and his father took off on a European voyage instead. It was on this journey that he first encountered Italy. Once there, he spent a few months under the roof of Signora Guiseppa Danti, and he recalled that it was “there, in the venerable Borgo Sant’ Apostolo, consecrated in my imagination by a verse of Dante’s… in the home of a learned lady who bore the name of the poet, [that I] became enamored of the Divina Commedia.” He began reading the Paradiso, memorizing stanzas, and translating small pieces of it. He would continue to develop such a passion for Dante that his most notable poetic success was his treatment of a translation of Dante’s Inferno. After returning home to Boston in 1837, he began following in his father’s footsteps and studied medicine at Harvard. Though he never completed his degree, he did practice dentistry and was often referred to as “Dr. Parsons.” Harvard eventually bestowed an honorary M.A. on Parsons in 1853. In 1840, at the age of twenty-one, Parsons became a proprietor of the Boston Athenӕum.  In his introduction to The Athenӕum Centenary, Barrett Wendell claimed that Parsons  “showed insatiable appetite for fiction and biography.” At the age of twenty-two, Parsons published his most famous original poem, “On a Bust of Dante” in the Boston Advertiser. This poem was anthologized in Henry Wadsworth Longfellow’s The Estray: A Collection of Poems and continued to be included in American poetry anthologies thereafter. Two years later, he published a few stanzas of Dante’s Divine Comedy, but although he would consistently work on this project, he would not publish full translations until over twenty years later.In 1857, he married Hannah Maria Allen, whom he often referred to endearingly as Annie. She was a cultured lady from his social circle who had previously printed some small volumes of his verse. In 1872, he published a general collection of poetry, The Shadow of the Obelisk and Other Poems. Other than a few collections of poems, much of his work circulated only within an intimate circle of friends, within which they were treasured. He also published often in leaflets, newspapers such as the Boston Evening Transcript, and magazines such as The Atlantic.

While Parsons was greatly respected by many of his contemporaries, including Ralph Waldo Emerson and Oliver Wendell Holmes, he was often characterized as more in tune with a time and place other than his own, probably resulting from his interest in Dante, the Middle Ages, and his strong Anglophilia. This perhaps contributed to the fact that he was more rigorous in his translations of Dante than he was prolific in the production of his own poetry. In 1863, Henry Wadsworth Longfellow published Tales of Wayside Inn, in which he explained the identity behind some of the key characters including the “Poet”, based on Parsons. Longfellow shared his interest in studying Dante and succeeded in publishing the earliest complete American translation of the Divine Comedy, but Parsons beat him by becoming the first American to issue a translation of the Inferno. Parson’s translation of Purgatorio was published posthumously.  Austin Warren, Professor of English at the University of Iowa, demonstrates Longfellow and Parson’s differences in their approaches to translation when comparing their translations of three stanzas: “Longfellow translates line by line. Parsons, collecting the sense, rearranges it, reducing nine verses to eight. He feels free to alter and to add.” Thomas William Parsons divided his time in  later years between the English countryside and the environs of Boston. In 1881, after twenty-four years of marriage, his wife Hannah passed away. He privately circulated four poems in her honor to his friends. Among them was “Into the Noiseless Country”:

“Into the noiseless country Annie went,

Among the silent people where no sound

Of wheel or voice or implement – no roar

Of wind or billow moves the tranquil air:

And oft at midnight when my strength is spent

And day’s delirium in the lull is drowned

Of deepening darkness, as I kneel before

Her palm and cross, comes to my soul this prayer,

Eleven years later, on September 3rd of 1892, Parsons died from apoplexy during a stroke. He was found dead in a well in Scituate, Massachusetts, where he had been staying with his sister and being cared for by a nurse.