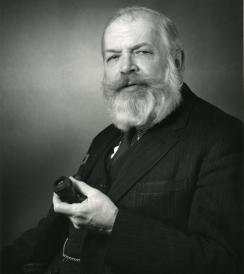 Walter Muir Whitehill (1905-1978) was Director and Librarian of the Boston Athenæum from 1946 until his retirement in 1973. He received his bachelors and masters degrees from Harvard and finished his PhD at the University of London in 1934 for his thesis on the architecture of medieval Spain, not published until 1941. In 1936, he became the assistant director of the Peabody Museum in Salem which he left in order to serve in the navy during World War II. After the war, he came to the Boston Athenæum where he found his home, a base from which he participated in, or, more accurately, led nearly every New England cultural institution or society, and became the epitome of a prolific author. David McCord’s unorthodox description of him presents a more interesting picture than conventional biography would and aptly introduces this necessarily abbreviated list of his many publications:

Any friend of Walter Whitehill is aware of certain things which he likes, dislikes, or abominates. He has obliged me—at my request—with a small but select list of these opposites. He likes beauty and clarity of language, brevity and punctuality; dislikes jargon and long-winded meetings. He likes the prose style of Samuel Eliot Morison and The Book of Common Prayer; dislikes the writing of educationists and liturgical experiment. He favors classical scholars, Egyptologists, medievalists; dislikes all “social scientists.” He likes Gibbon, saints, and nearly all dogs, dislikes C.P. Snow, reformers, nearly all “do-gooders.” He likes the view of mountains, but not climbing them; the streets of London and Copenhagen, but not a lake bordered by summer cottages. He likes music at home, Gregorian music, Mozart, Haydn & Co.; dislikes the Boston Symphony programs, unaccompanied polyphonic music, rock—which he generously calls rock music. He likes Chinese calligraphy, a mastery of technique, the architecture of A. Palladio, the sculpture of Bernini; dislikes paint slobbered on canvas, “self-expression,” the architecture of Le Corbusier, the sculpture of David Smith. He likes good book design and printing, dislikes (as I violently do) eccentric margins and unjustified lines. He likes staying at home; dislikes going to the opera or theatre. He likes books; dislikes television; likes clubs, a small dinner, eating at a table; dislikes most restaurants, cocktail parties, picnics and buffets; likes Naval officers; dislikes real estate promoters.

A bibliography speaks for itself; but the few scattered samples taken chronologically which follows will give the reader at least a notion of the spread of Walter Whitehill’s interests—interests by no means limited even to a dozen disciplines. [David McCord, “Walter Muir Whitehill,” Bulletin of Bibliography vol. 30, no 3 (1973): 114.]